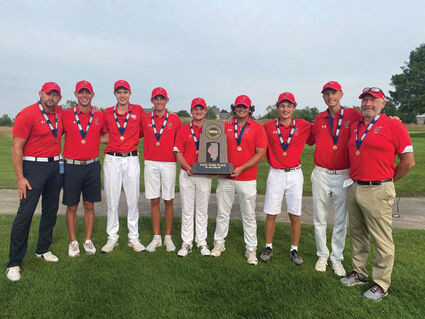 The Hinsdale Central boys and girls golf teams both earned hardware at their respective state final tournaments last weekend, with the boys placing third and the girls placing fourth in two of the lowest-scoring state meets in history. (photos provided)

The Hinsdale Central boys golf team was less than satisfied with its sixth-place position after the first round of the IHSA state golf tournament Friday at The Den in Bloomington.

It didn't take long on Saturday for the Red Devils to upgrade their status.

"We had five birdies and a par on our first hole of the day, moving us into third place," said head boys varsity golf coach Jess Krueger.

They held that spot the rest of the day, shooting 592 as team and extending to 16 the program's streak of top-10 finishes, dating back to 2005.

Central's score actually would have won the first-place trophy in all but a handful of years. Aided by calm conditions and summer-like temperatures, champion Glenbrook North (575) and runner-up New Trier (578) recorded the two lowest scores in the tournament's nearly 90-year history, eclipsing St. Viator's 583 in 2008 and Central's 585 in 2014 during its run of seven straight state titles.

"It was probably one of the strongest fields as far as teams go that I've been a part of," Krueger said.

The Devils were within two strokes of second place at one point, then had fend off conference foe Glenbard West to secure third. A magical finale by senior Jack Inabnit brought it home.

Having started his round on the back nine, Inabnit had good vibes from a birdie on eight as he approached the par-5 ninth, his last hole as a Central golfer. He bombed a 295-yard drive, leaving him 170 yards to the pin. Inabnit grabbed his 6-iron.

"I wanted to put it on or around the left side of the green to give myself a chance at birdie," he related.

Instead Inabnit sent it right at the flag - and right into the cup on the fly for an extremely rare 3-under-par, an albatross in golf lexicon. He heard a roar but couldn't see the result for himself until he neared the green.

"That was my best shot ever," said Inabnit, who placed 12th individually with a 145.

It was also his last shot ever as a Central golfer.

"I was kind of in disbelief. It ended quicker than I expected. But seeing all my teammates celebrating on the green was great," commented Inabnit, who said his match ball is sitting on a shelf in his room.

Krueger saw it all.

"It was a ridiculous shot," Krueger said. "Everybody just went nuts."

Moments like that and a team-best round of 70 from sophomore Alex Rasmussen helped Central shoot a second-round 293, the lowest of any team (see results on Page 49 for full scores)

Senior Michael Spitzer, who finished fourth on the team, said the team showed its grit in its day two rebound.

"We battled back from a bad first day when we didn't' play our best. We gained some ground on those other teams," he said.

He'll treasure the memories from his last campaign.

"I had a great time this year with the team," Spitzer said. It was a lot of fun."

Head girls varsity golf coach Nick Latorre said the team competed well, as they have all season, registering a score of 627 over the two-day meet.

"Their level of play was so good that, given the way the season went, we were hoping to contend for the championship," he said.

Latorre said players shot right around their season averages. Some of their opponents, however, were able to raise their games. Barrington claimed the title with a scorching 595, the lowest winning total in the event's history.

"You needed to play exceptionally well to get in those top spots. Our girls worked their tails off," he said. "We just didn't play to the level of the teams that played ahead of us. Players are just improving and getting so much better year in and year out."

Leading the Red Devils was freshman Elyssa Abdullah, who tied for fourth place overall with a score of 147 to earn All-State honors (see results on Page 49 for full scores).

"I'm pretty proud of how I played," she said. "This whole season has been a really great experience."

Any nerves going into her first state meet?

"I wasn't really nervous," Abdullah said. "I was looking to win, but I'm still pretty proud of my score. I did my best."

Rain the night before softened the course, and favorable conditions Friday and Saturday all contributed to an aggressive scoring mindset. Abdullah said that helped her excel in the short game.

"I made a lot of putts and I stuck a lot of chips close to the hole," she said.

One of the highlights of the weekend, Abdullah revealed, was the bus ride down listening and singing to Christmas music.

"Even though I didn't play well myself (at state), the experience was one to remember," Larson said. "Being with the team and getting to be a part of that last tournament was really special and a great way to end my senior season and golf career."

"Just maintaining that level of excellence is impressive," he said.