Rotary Run returns to the streets 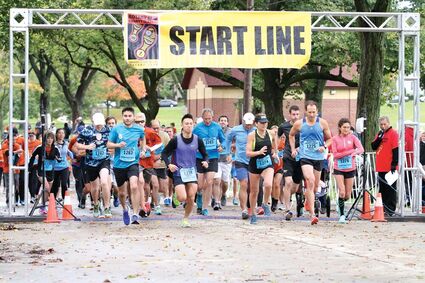 Topping the silver anniversary of an event can be tough to do - especially if a global pandemic strikes.

After a successful 25th Rotary Run Charity Classic in 2019, organizers had to move to a virtual event in 2020 due to COVID-19. The run is back in person this year, and organizers aren't the only ones who are excited.

"When we really began working on the marketing back in March, we've noticed a tremendous desire to get back to whatever normal is," said Tom Norton, Rotary Club president and race co-chairman. "I think everybody in this village just wants to get back to their lives and get back to fun, and for a lot of people in the village, the fall season includes the Rotary Run."

"We're well on the way to that," Norton said last week. "We have a shot to exceed it."

One of the more unique initiatives funded by race proceeds last year was the Young Writers Project in District 181, Norton said. The Rotary helped fund publication of a hard-bound book featuring essays, poems and artwork D181 students created about the pandemic.

"I think it will go down as probably one of the most interesting artifacts of the 2020 period as far as what kids were experiencing trying to go to school in the middle of this thing," Norton said.

The Rotary has been a strong supporter of the D181 Foundation and last year was no exception, said Meg Cooper, executive director.

"That contribution allowed us to take the whole project to another level," she said. "It made it possible to do all the extra things we did with the program, including creating the book in a hard cover instead of a paperback. It made a huge difference to the project."

The Rotary donation has been used primarily to support the Young Writers program for the past five years, Cooper said.

"They are a cornerstone to everything the D181 foundation does," she said. "They are our single largest donation each year, and over the course of the 12 years that we've been one of their beneficiaries, they are cumulatively the biggest donor the foundation has.

"If we didn't have them, we wouldn't be able to do a huge part of the program that we do in all different ways, whether it's parents speakers or grants to teachers. They help us do it all," Cooper added.

The challenges presented by the pandemic last year provided the club many opportunities to distribute funds saved for the proverbial "rain day," Norton said.

"It was raining all last year," he said. "It was a great year for deepening our partnerships in the community."

With COVID-19 still a factor, organizers have gotten the go-ahead from medical advisors to hold the event. Norton said runners who want more space on the route can simply leave a few minutes after the first group takes off without affecting their times.

"Until you cross the starting line, your tag does not activate," he said. "You don't have to race out with entire group right away."

The event features several races, from the 10K run to the 5K Walk 'n' Roll (see sidebar). Even pets can get in on the fun in The Mutt Strut.

The race offers some special incentives for students in Community Consolidated School District 181. The elementary school that has the highest percentage of runners based on population will earn the Mrs. B trophy, and the middle school with the highest percentage of runners receives the Mr. K trophy. In 2019, 500 of the nearly 800 runners were District 181 students and families.

School mascots also participate in a contest as part of the post-race festivities. The Mascot Race should be particularly exciting this year, Norton said, with District 181 Superintendent Hector Garcia serving as the grand marshal.

"The mascot race just made me smile, because how could you not get a kick out of watching nine mascots run down the street," he added.

Garcia thanked Rotarians for the significant work involved in planning the race along with all of the participants and donors.

"I hope that we're able to raise an awful lot of money for local charities and the work the Rotary does throughout the country and around the world," he said.

The race has raised more than $2 million since 1995, and Norton hopes to add a healthy amount to the total this year.

"I think this run is going to be a very successful one," Norton said.

Start times are as follows.

Trophies are awarded to first-, second- and third-place male and female runners for the 10K and 5K races and in several ages categories, from 5 to 70-plus.

Interested runners and walkers can register online at https://www.rotaryruncharityclassic.com. The cost is $25 for individuals and $95 for families of four or more through Friday, Oct. 1. Registration includes a T-shirt. After Friday, registration increases to $30, with jerseys and timing chips available until they are gone.

Supporters also can dine at The Country House in Clarendon Hills now through Oct. 3 with 15 percent of the bill donated to the Hinsdale Rotary. A coupon is required; limited supplies will be available at the restaurant.