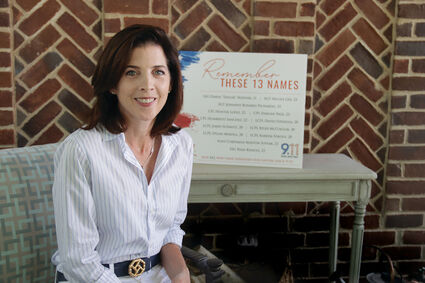 ROSEANN COYNER HAS LIVED IN HINSDALE SINCE 1994 • MARRIED TO JEFF • GRADUATE OF WELLESLEY COLLEGE, NORTHWESTERN'S KELLOGG SCHOOL • MOTHER TO ANDREW, JULIA & JOHN • MOVED OFTEN GROWING UP AS A MILITARY BRAT

Hinsdale's Roseann Coyner was driving her daughter to her new job in Seattle in mid-August when they passed through North Ogden, Utah. In 2018, North Ogden's mayor Brent Taylor was killed in Afghanistan while serving as major with the Utah Army National Guard. In tribute, a nearly 12,000-square-foot flag was hung over North Ogden Canyon.

"When we drove past, I saw the flag," Coyner recounted. "A significant number of people from the town carried this mammoth flag up to the canyon."

Two weeks later on Aug. 26, 13 U.S. service members - 11 Marines, an Army soldier and a Navy sailor - were killed in Afghanistan in a suicide bombing at Kabul's international airport. Coyner was stirred to act.

"When I see stuff like this, it really is pretty emotional, because not everyone comes home," she said.

To honor their sacrifice, Coyner printed up 130 yard signs that read "Remember These 13 Names" with each one listed, along with their ages. Staff Sgt. Darin "Taylor" Hoover was the oldest at 31 years old. Five were just 20: Lance Cpls. David Espinoza, Rylee McCollum, Dylan Merola, Kareem Nikoui and Jared Schmitz.

"These are young people that have stepped up and answered the call of service," said Coyner, whose three children are in the same age range. "We felt like we just needed to do something more than just talk about it."

The call of service resonates deeply with her. In 1966, her older brother answered a phone call informing him that the plane carrying their Army colonel father had struck a mountain in Vietnam. He was seriously injured but survived. Thirteen of the 31 passengers did not.

The timing of the deadly Afghanistan attack right before this month's commemorations of the 9/11 attacks imbued the project with greater gravity.

"Because of the 9/11 anniversary, I thought it was important to recognize all the veterans who have defended the country since 9/11," she said, a sentiment that is included on the sign.

Coyner gave signs to veterans she knows and asked others for $20 donations. Any surplus funds she receives will be donated to veterans organizations, she said.

Getting involved is not new for Coyner, having held leadership positions with the Hinsdale Middle School PTO and the Music Parents Association among a long list of volunteer endeavors.

A couple in town recently transplanted from New York City thanked Coyner for her gesture.

"We feel like it's touched some people and had an impact," she said. "I regret that I can't change the outcome. But I can acknowledge it and I can share with those families that other people care."