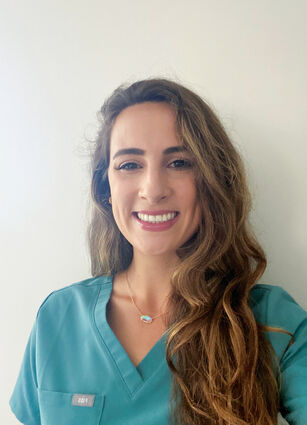 Hinsdale native Andrea Kopp graduated from Belmont University's nursing school in May and began her residency in July, regularly working with COVID-19 patients. "Most people who aren't in the middle of it don't understand the depth of it," Kopp said of the taxing nature of the job. "The only people who can really relate to each other are the health care professionals." (photo provided)

When Hinsdale native Andrea Kopp decided to pursue nursing as a livelihood, she never expected to launch her career in the middle of pandemic.

Now, almost two months into her nurse residency program in the intensive care unit of Vanderbilt University Medical Center in Nashville, Tenn., the Hinsdale Central 2017 alum said her work, while intense, is what she has long felt called to do.

"I've always wanted to help people in some sort of health aspect," Kopp said late last month. "In nursing, you get to just be there and help people on their worst day and help them to keep on living their life."

She earned her nursing degree from Belmont University - also in Nashville - in May. After passing her boards, she started her residency at the end of the July. The medical ICU she was assigned to is the sister unit with the COVID-19 ICU, so she has been providing care for a lot of very sick patients during the Delta variant wave.

"Last year (the medical ICU) was turned into the COVID ICU, and they had to cap the number of (non-COVID medical ICU) patients at 20," Kopp said.

Like in many other parts of the country, the situation had been improving until this summer's spike. Patients being admitted for something other than COVID-19 again are being diverted.

"We send them to a medical floor to make sure we have room for the COVID patients. In the past week cases have doubled," Kopp said.

Kopp was finishing up her junior year at Belmont last spring when the pandemic hit, forcing her and her handful of fellow nursing students to switch to remote learning. It was a tough adjustment for most students, she related, especially in a field where hands-on learning is essential.

"It was not too fun," Kopp said. "Obviously everything transitioned online, so not really being let into hospitals to do our clinicals was hard.

"We were wanting to help but not being allowed to at that time," Kopp added.

Fortunately, her part-time job as a nurse tech gave her access to what was happening inside the hospital.

"I still was able to get involved in some aspect," Kopp said.

The frontline nurses she witnessed working with very sick patients during the height of the pandemic inspired her.

"I don't know how they did it, to be honest," she said, adding that she learned a lot about palliative care to bring comfort to those whose condition would ultimately prove fatal. "(The nurses) were understaffed and working overtime. All that stuff took a toll on everyone."

The patient demographic is skewing younger with the recent spate of cases, and keeping families informed can be particularly emotional, she said.

"I saw an 18-year-old patient FaceTiming his parents. It was just sad to watch them watching him struggle, and they couldn't even be in the room with him when they wanted to be," Kopp said. "We just try to help them out when family members can't come see them."

There are celebrations, too.

"It's a big deal when people get to move on and go to rehab. It's a good feeling for everyone involved," she said, noting that such success stories have been rare.

Kopp wipes down the seat of her car and leaves her shoes outside her front door upon returning home each day.

"I put my scrubs directly in the washing machine and I go in the shower before I do anything and touch anything," she said, describing her long shifts. "I've really only had a few days off in the past few weeks."

Kopp said she relies on physical fitness outside of work to ease her stress. Commiserating with her colleagues is also cathartic.

"Just having the other nurses around to talk to who understand what's it's like is helpful," she said.

The vehicle caravans and "Heroes Work Here" signs expressing public gratitude for their sacrifices so prevalent last year are far less conspicuous 18 months into the pandemic. Kopp said posing a simple, sincere "How are you doing?" to a nurse is sufficient to communicate one's support.

"Getting put in the spotlight made everyone kind of notice that what we do is hard," Kopp said of the display. "It just showed how strong nurses are and how much we actually do."

And her experience so far has reinforced her resolve to keep doing it.

I'm super excited to be where I am," Kopp said. "I've learned a ton. All the nurses I'm surrounded by are the best of the best. They're all willing to teach me. It's definitely been tough and overwhelming, but there hasn't been a time where I've asked, 'Why did I do this?' "