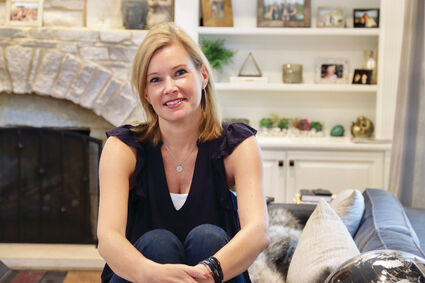 Amanda Lannert Keynote speaker at the HR Tech conference in Vegas later this month • Loves to hike • 15-year Hinsdale resident • Runs, but not because she likes it

Lannert is CEO of Jellyvision, a Chicago-based software company that licenses a platform to large employers who want to help their workforce make the most of the company's benefits packages.

"The average employer offers 200 to 400 point solutions," said Lannert, speaking of the perks and services that are part of many benefits plans. Jellyvision's product, known as ALEX, allows employees to tailor benefits to meet their individual needs.

"It's delightful and helpful and, dare I say, fun," Lannert said of ALEX. And she could say the same of the company where she has worked since its founding in 2001. Jellyvision received the award for Best Culture at the Chicago-based Moxie awards, was named a top-10 best place to work in Chicago by The Chicago Tribune and the No. 1 one place for millennials to work in the city according to Crain's.

Lannert herself also has received plenty of attention while helping to grow Jellyvision to serve more than 1,500 companies, including many Fortune 1,000 clients. She was named CEO of the Year at the Moxie Awards in 2014 and 2015 and Woman of the Year for the Chicago Rotary Club of 2018, among many other accolades. Just this year she was inducted into Chicago Innovation's Hall of Fame.

Raised in Virginia, Lannert attended college in Pennsylvania and moved to Chicago to take a position with Leo Burnett six years prior to joining Jellyvision. Along the way she met Kevin, her husband of 23 years, with whom she has three daughters - Chloe, Elise and Izzy.

Lannert said she never set out to be CEO of anything. While in college she dreamed of a job writing public policy to help hospitals navigate the overlap between science and ethics. Although those plans took an unexpected turn, Lannert said her degree in English literature has helped her at every stage of her career.

"I've used the skills I learned in college," she said.

A self-described lifelong learner, Lannert said she gains knowledge from the many companies and nonprofits on whose boards she serves and from the people she mentors through organizations like Impact Engine and TechStars.

Lannert's love of discovery and exploration carries into nearly every part of her life, including her kitchen, where for two years she has tackled a new ingredient, recipe or cooking technique every Sunday.

Like ideas shared around the conference table, some turn out to be better than others, but she learns something from each and every triumph and failure.

Lannert said her success as a leader in the business world isn't all about hard work. Respect for people and a good sense of humor are key to making work enjoyable not just for herself, but for those around her.