Vet reflects on 9/11, his service in Iraq 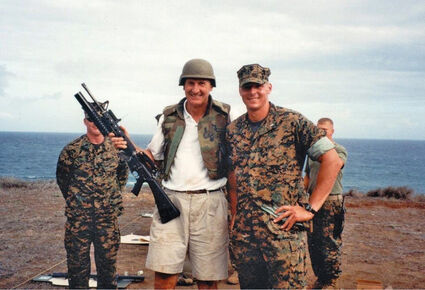 Hinsdale's James Haunty enjoyed a visit from his father, Big Jim, while he was serving as a platoon commander/company executive commander in Hawaii before he re-enlisted and was deployed to Iraq. His father, grandfather, uncles and brother served in the Army and Navy, but he chose to go into the Marines. (photo provided)

Twenty-three-year-old James Haunty was a recent graduate of the U.S. Marine Corps infantry officer course in Quantico, Va., visiting fraternity brothers at the College of William and Mary when terrorists attacked the U.S. the morning of Sept. 11, 2001.

"It was just surreal," he said. "I had a friend who perished in the Twin Towers. At the time I didn't know that.

"It was surreal that we had been attacked and understanding that I was in a position to defend our country and more than likely I'd be called to duty to do that, to perform that," he continued. "It made that training seem all the more significant because it was no longer a peacetime military, it would be a wartime military."

Haunty's expectations of being deployed overseas never came to fruition. He spent the next three years serving as rifle platoon commander, 2nd battalion, 3rd Marines in Kaneohe Bay, Hawaii. He completed his service in 2004 and returned home. He had just been accepted to business school when the second Battle of Fallujah occurred in late summer 2004.

"You want to do what you've been trained to do," he said.

So he called the Marine reserve unit in his hometown of Columbus, Ohio. The unit was preparing to deploy to Iraq.

"The major said, 'We are in dire need of infantry officers to lead the battle in Anbar Province,' " Haunty recalled. "I remember Major White said, 'I would give you my car if that would convince you to come.' "

Haunty voluntarily enlisted. His unit mobilized in December, trained from January to March of 2005 and was deployed to Al Asad Air Base in March 2005. He served as the weapons company detachment commander in the city of Hit, Iraq, for six months.

"It was very, very challenging," he said. "Our battalion had more casualties than any battalion in theater since Vietnam, except for the Beirut bombings.

"It was just really challenging," he added. "It was very emotional. You just had to constantly pick yourself up and carry on the mission."

He said he never questioned his decision to volunteer to serve in those conditions.

"I figured if I wasn't going to do it, someone had to do it," he said. "Why should someone else do it for me? I was trained to do it. That's why I joined the Marine Corps. I had no regrets."

Haunty was fortunate to make it home with no injuries, but arrival back on U.S. soil didn't mean the end of his challenges.

"Coming back, it was the most bizarre adjustment I think you can imagine, because you're overseas in very different situations, you're losing people that you are responsible for and you're out there in just a very stressful environment - as stressful as you can possibly imagine - and then you come back and everything here is completely normal," he said. "It's really difficult for someone who has been deployed in combat to come back and see that people are living their life normally. It took a long time to adjust back into living a normal life."

He spent 11 months working for a neighbor's insurance company before starting on his MBA at Northwestern University's Kellogg School of Management, where he had deferred his acceptance a second time.

Even 20 years later, the terrorist attacks of Sept. 11 still strike him as absurd, and he mourns the thousands who died as a result.

"The loss of life since, both American and non-American life, civilian life overseas, American civilians, American military, innocent civilians who died as a result of what's happened after 9/11 is just tragic," he said. "But at the same time there's a realization that there is very much evil that exists in the world. That evil cannot be appeased. It can't be negotiated with. It's unfortunate that it has to be fought. That's the truth. And it will continue to have to be fought."

Haunty, who has lived in Hinsdale since 2011, now works as chief operating officer with Spartan Infrastructure. He and his wife, Molly, have three children, Jack, 10, Ainslie, 9, and Jake, 6.

Haunty said he hopes his fellow Americans spend Saturday thinking about the loss of life.

"We have Veterans Day. We have Memorial Day to honor the service men and women, but 9/11 is really to honor that needless loss of life and the tragedy of that day," he said.

He seeks no recognition for his own efforts to serve his nation.