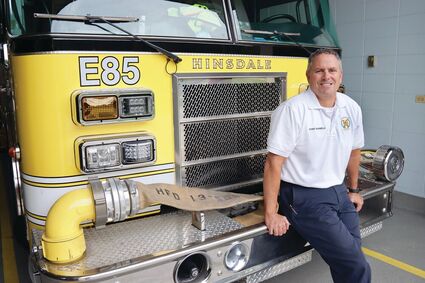 A Downers Grove resident and father of three, Fire Chief John Giannelli is celebrating 30 years as a member of the Hinsdale Fire Department. (Jim Slonoff photo)

The best thing about John Giannelli's job as Hinsdale fire chief is the opportunity to help someone in need. The worst part, Giannelli said, is witnessing that need for help.

Inspired by a cousin who worked as a firefighter in Pennsylvania, Giannelli became a cadet with his hometown department in LaGrange Park when he was 18 years old and started as a firefighter/paramedic in Hinsdale in 1991. Working his way up through the ranks of the department, he was named chief five years ago.

As chief, Giannelli uses his decades of experience to keep things running smoothly. He's responsible for the budget and staffing and makes sure all of the proper guidelines are being met. And he also finds time to do the hands-on business of a firefighter/paramedic.

The opportunity to go out on calls is one advantage to working with a small department, Giannelli said. But there are things he misses from his earlier years. The transition from 24-hour shifts to a daily eight-hour shift was a big change, he said.

"That was the hardest adjustment," he said. Even five years later, Giannelli said he misses the time he once spent with his fellow firefighters and the meals they would prepare together.

"There's a lot of stuff over the years," said Giannelli, who has helped to deliver a baby, responded to countless accidents, rescued people from floods and even helped to save a fellow firefighter who fell through the floor during a structure fire. He's also fought fires large and small, but thanks to improvements in building codes and fire prevention, structure fires are far less common than in the past, Giannelli said.

The Hinsdale Fire Department responds to seven or eight incidents each day, every one of which has the potential to be the worst day for someone on the other end of that call. Giannelli and the rest of the department do all they can to minimize that trauma any way they can.

On Saturday, Sept. 11, Hinsdale firefighters past and present will gather to commemorate the events that traumatized every American 20 years ago. They will come to the station for breakfast, but not before observing the department's annual moment of silence.

"We pull the apparatus out and turn on the lights," Giannelli said, as they pause in memory of the moment that the first plane hit and the countless lives that were changed that day.

Giannelli was on shift on Sept. 11, 2001. He said he remembers watching the news and wondering, along with people all over the world, what would happen next. He and the rest of the firefighters spent the day prepared to respond, should Chicago prove to be the next target.

In the days following the attack, Giannelli said he remembers a renewed reverence for the work of the fire department. Hinsdale residents came by with gifts of food and stopped him and his fellow firefighters just to say thank you.

More than 30 years after working his first shift as a member of the Hinsdale Fire Department, Giannelli sees no end in sight. He said he still enjoys working with the members of the fire department and for the people of Hinsdale.

"I'll keep working as long as I still like doing it," he said.