Local resident brings his passion to the playhouse 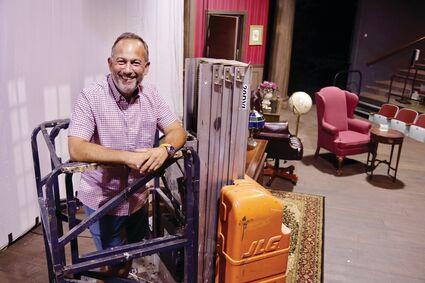 British ex-pat John Baderman operated lighting and sound for community theaters back in his native London, including for his uncle's troupe, which performed shows in a synagogue.

After his wife's career brought them to Chicago and they settled in Hinsdale, Baderman was introduced to the Theatre of Western Springs, complete with its own building and stable of accomplished actors.

"It's almost professional theater," said Baderman, a set construction volunteer at the theater for the past seven years. "It was a big step up, a bit of a learning curve. But it's fantastic."

In recent seasons he's taken on set design duties, including for the American democracy satire "The Outsider" that opens today, Sept. 9, and runs through Sept. 19 (see Page 30 for details).

"(The set) is the inside of a governor's office," Baderman said. "We kept it simple."

But like politics, the path from concept to consummation is multi-phased.

"I want to know what the director's broad idea is," he said of his creative process. "From there, I will start putting some ideas down and amassing a scrapbook, a color palette."

Once the director signs off, Baderman continues his work.

"I design the shape, then I have to look at the colors and what furniture we're going to use - the whole look of it," he said.

Baderman was first drawn to the stage in high school, but not as a performer.

"I don't act," he stated flatly. "I have no interest in acting at all."

He and his family expected to spend only about three years in the States. A dozen years later they remain, enabling Baderman to pursue a number of activities in the local scene.

Baderman described "The Outsider" as "a commentary on politics and the media" with no partisan message.

"The words 'Democrat' and 'Republican' are never mentioned," he said. "We don't know what state it's in. It's completely vague."

He enjoys going to see non-amateur productions, reflexively viewing the performance through a designer's lens.

"I look at the set, I look at the lights. I get very distracted by the technical side rather than the acting," Baderman admitted.

The budget, build time window and limited manpower all factor in. Scene changes are tricky, Baderman explained, and the thought of incorporating doors makes him shake his head.

He often has to wait to see the finished product with the rest of the opening night crowd.

"Sometimes the first time I see a completed set is when I come in as an audience member," Baderman said. "I love that. It's a big moment."

During one show he overheard a couple of girls from a set construction class he taught excitedly pointing out their contributions to mom and dad.

"They not only enjoyed what they were doing but they were proud about it and wanted to tell their parents."