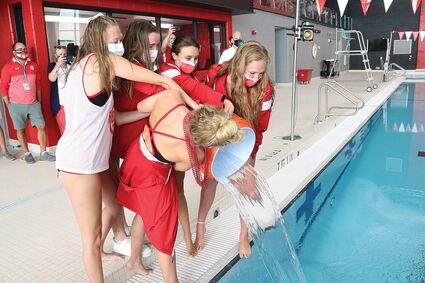 "Nothing great was ever accomplished without enthusiasm."

That was the life motto of Don Watson, the former coach for whom Hinsdale Central's new aquatic center is named. Enthusiasm was in abundant supply at the center's dedication ceremony Friday. And a bit of disbelief.

"So much of it was like, 'Pinch me. Did this really happen? Am I really standing here on deck of our new facility?' " said Carol Bobo, Hinsdale Central Foundation president. "We have talked about it for so many years."

Bobo, who graduated from Central in 1973 and coached girls swimming there for more than two decades, said she has been watching construction videos posted online and visiting the site, but seeing it completed during the dedication ceremony was amazing. She enjoyed returning the following morning for a more private visit.

"I've been in that old pool and Saturday morning I got in the new pool. I swam and jumped off the board. It was just amazing," she said. "It was just so exciting."

Central girls and boys varsity swim coach Bob Barber spent plenty of time in the old pool during his time as a student and member of the boys swim team.

"It was tired. It was limiting," the 1992 grad said of the old facility. "We would walk downstairs through three hallways to a locker room in our wet swimsuits just to get changed because there was no boys locker room."

Barber had high praise for the new center, which features a 10-lane pool.

"It's the first venue that celebrates aquatics top to bottom that I've experienced in the state of Illinois," he said. "I can't wait for all 10 teams to walk in here (Saturday) and see and celebrate not only the success of Hinsdale Central but the success of Illinois swimming, and hopefully get excited by this incredible opportunity in this incredible pool the community has provided for their racing."

The first meet will be a special one for more than one reason, as it will be a tribute to the late Kendall Pickering, a standout swimmer who was killed in a car accident in December 2020.

"My primary focus is the fact that we're taking the time and making our first event to remember and create more memories of Kendall," Barber said. (See the sports story on Page 50 for more details.)

The $20.5 million facility was paid for primarily with proceeds from a building referendum voters approved in the spring of 2019. An alumni group raised $1.6 million, making it possible for the district to build a 10-lane pool instead of the six-lane pool approved in the referendum. The group also requested the center be named after Watson. 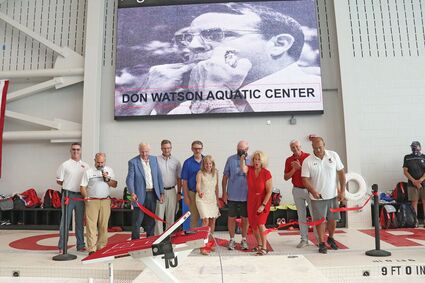 Watson, an All-American distance swimmer in college, began his coaching career at Central in the 1960s. He led the boys swim team to 12 straight state championships from 1967-78. His program produced four Olympic athletes, and his accomplishments are widely recognized in the swimming world. He passed away in November of 2017 at age 87.

Bobo said every student who walks into Central will have the opportunity to use the pool during a PE or lifesaving class.

"Outside of school it's going to be used for the athletic programs first and swim club, and hopefully there will be some community stuff that can be done as well," she said.

Barber noted his gratitude to all who helped make the new center a reality.

"Thank you to the community and the alumni for pushing and building such an incredible space for these kids," he said.