Dad helps son, others with autism find rewarding work, confidence that comes with it 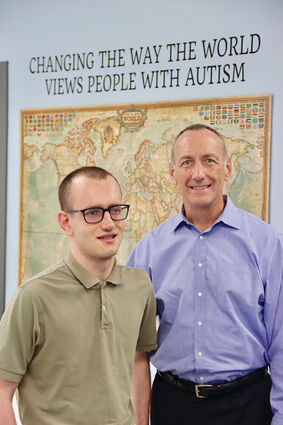 Matt Friedman recently marked six years of employment with Autonomy Works, a company created by his father, David Friedman of Hinsdale, to put the unique talents and interests of Matt and other adults with autism to work for companies across the United States. (Jim Slonoff photo)

For many parents, a child's impending high school graduation is filled with anticipation of what is to come. But as Matt Friedman approached the end of his years at Hinsdale Central High School, his parents worried about what the future had in store.

Diagnosed with autism, Matt lacked the social skills and executive functioning needed for a traditional college experience, said his dad, Hinsdale resident David Friedman. But he knew his son had skills that would be valuable in the workplace.

"Matt is good with patterns and numbers," Friedman said.

Rather than wait and worry that his son would fall among the 80 percent of people with autism who are unemployed, Friedman used his resources and business background to create a workplace not only for his son, but for other young adults facing similar situations.

Friedman said the idea for Autonomy Works occurred to him while working in marketing for a major retailer that used newspaper inserts to reach customers. A single, simple mistake in one of those inserts could cost a company millions of dollars, Friedman said. Ads must be carefully examined to avoid costly mistakes.

"I realized this was stuff that Matt could do," he said.

Tasks that many people would find tedious never get boring for employees of Autonomy Works, Friedman said.

"They like the repetition," he said, which probably has much to do with the company's high employee retention rate.

Friedman said that while many new college grads want to experience different things as they search for the job that makes them happy, his employees prefer to master a small number of tasks.

The pandemic and its resulting need for people to work from home threatened to be challenging for Autonomy Works and its employees.

"Change is not the favorite thing of people with autism," Friedman said.

As employees moved their workspaces to their homes, Autonomy Works leaders did all they could to make the transition smooth, moving desks and office equipment to employees' houses. With a couple of exceptions, Friedman said, everyone adapted to their new work environment.

As for his own son, Matt is celebrating six years with the company his father created, and reaping benefits that go far beyond a paycheck.

"It's been really remarkable," Friedman said of the change he's seen in his son.

Matt is taking classes at the College of DuPage, has mastered the public transportation system and even talks about one day moving out on his own.

"It's really shifted his focus from looking backward to looking forward to where he's going in life," Friedman said. "He has a lot more confidence now."

Matt's is just one success story to come out of Autonomy Works. Friedman said employees with autism have bought their own cars, gone back to school and started and sustained relationships, all as a result of the confidence that comes from finding success at a job they enjoy.

"We just wish we could do more," said Friedman, who recently shared the story of Autonomy Works on the CBS news program, 60 Minutes. With 500,000 people with autism set to enter the workforce in the next 10 years, Friedman said he's eager to share what he can to see similar companies start up in other parts of the country.