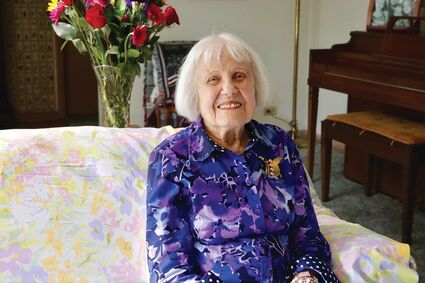 The north end of Hinsdale felt more rural than suburban when Virginia Feller and her husband, Bernie, moved there in the 1950s.

"This was like a country town then," said the 102-year-old Feller. "The Salt Creek Club was a meadow."

The village could boast at having three grocery stores, three drug stores, a bank "and reasonably priced clothing stores with nice merchandise," she noted.

Just as today, one just had to make sure not to exceed the downtown parking limit.

"They had a policeman they called 'Shadow.' He went around and marked tires, then he went around again and give tickets," Feller recounted.

The Hinsdale Fire Station was on First Street then, next to the popular Hinsdale Theater. In addition to film screenings, the venue hosted live summer stage performances by some of the era's leading acts, like Sid Caesar and Imogene Coca.

"I shook hands with Imogene Coca," she said, laughing at the memory.

Feller lives in the home her husband built enchantingly close to Fullersburg Woods.

"I used to walk there all the time," said Feller, who still gets around just fine.

Sometimes the forest's inhabitants visit her.

"Two times a mother deer had her (baby) right in my backyard," Feller shared.

She learned that fawns are left on their own during the day while their mothers go off to feed. Seeing the young deer alone during a rainstorm, Feller's own maternal instinct kicked in.

"The poor little thing's going to get all wet," she thought before realizing that getting wet is part of life outdoors.

"I'm trying to think what I have to cover it up," smiled Feller, an engaging storyteller.

She worked at her husband's real estate office in Oak Park doing accounting and filing until 2019.

Her organizational skills remain impeccable, and she insists on doing her own banking and running errands with helper Vida.

"I like to do my own book work. I balance my checkbook and pay all my bills," she said. "My travels consist of the bank, the drugstore, the doctors, the grocery store and occasionally the bookstore."

An unwavering Chicago Blackhawks fan, Feller was treated to box seats at a game in celebration of her becoming a centenarian.

"And, of course, the Hawks lost," she said with a chuckle.

Cooking, on the other hand, was never among her favorite activities.

For a treat she prefers dark chocolate or raw nuts - but always in moderation.

Feller will turn 103 in October. Her wish would be to do something she had to give up at age 97: driving.

"I miss being able to drive my car and do what I want," she said.