John Naisbitt was presented with his Coach of the Year Finalist award by the National High School Athletic Coaches Association last week. He credits former Hinsdale Central head coach Jay Kramer (above, left) for teaching him to make winning a state title each season's exclusive target and to "trust the process" of building a champion. (file photo and photo provided)

Impressive, right? Not by the Red Devil standard, which prescribed adding to the three straight titles captured from 2007 to 2009.

"We came in second, and it was very disappointing, with a bunch (of players) that had won three titles," Naisbitt said of the 2010 outcome, "That was the real reality check that you cannot take anything for granted."

Fast forward to 2012. Naisbitt was exhorting his state squad while keeping tabs on the overall team point totals.

"I'll never forget that day at the state meet when I got a call that there was a match result that had caused us to be alone in first, and nobody could catch us," he recounted.

Nobody would catch them for some time after that as Central proceeded to reel off four straight IHSA championships.

For his achievements, Naisbitt was honored last week as a Coach of the Year Finalist by the National High School Athletic Coaches Association at the group's convention in Lincoln, Neb. Naisbitt deflected much of the credit.

"It's great reflection of the talent that comes through the hallways of Hinsdale Central and the work of my assistant coaches," he said. "It's really an honor for the whole program."

He gives acknowledgment to his predecessor, Jay Kramer, for cementing the school as a perennial tennis power in his half-century at the helm. Naisbitt was his assistant for nine years.

"You get that it's a culture of very high expectations," Naisbitt said. "Second place is not our goal. We're a title-driven school."

That inaugural title of the Naisbitt era affirmed that he could live up to those expectations.

"That's when I finally felt I could sustain what Jay had handed me," he said. "The four straight titles are really fantastic."

His teams have brought home two more championship trophies since then to make six in 11 years. Naisbitt considers himself as a bridge between the more authoritarian coaching style of the past and a more open-minded spirit.

"You have to make the adjustment to the 21st century student-athlete," he said, alluding to the range of activities today's youth are involved in. "You have to be more flexible in your approach. We're really trying to be more supportive emotionally and socially with the kids. If you're more flexible, I think you're better able to work with them."

Adaptability was essential this past year, as the team was unable to play its normal schedule of top-rated opponents due to pandemic restrictions. Practices became simulated meets, with players challenging one another in scrimmage matches and Naisbitt shouting praise for good shots and smart tactics.

Jason Huang, a 2017 Central graduate and former Red Devil tennis member, said Naisbitt balances his drive for player improvement with a emphasis on savoring the ride.

"This mentality keeps the team pushing each other to be better, resulting in such a high level of competition," Huang related. "Even though he likes to push the team, Coach makes sure we are having fun and laughing throughout practice and matches. That's what makes the team work well together."

Naisbitt cited the in-between moments as the camaraderie-building ones in a typically individualistic sport.

"The journey is fantastic - the meals together, the downtime, the rain delays, the laughter and the jokes," he said. "These are what make you come back."

Naisbitt, a social studies teacher, taught and coached at Bolingbrook High School before coming to Central. While coaching is natural pursuit for him, taking charge of Central's legacy was an unexpected responsibility.

"I was fortunate enough to land at the premier Illinois high school tennis program," he said. "I have done everything in my power to maintain what was handed to me."

Having the depth of talent Central enjoys means making tough decisions on the tournament roster, a task Naisbitt doesn't relish. He relies on "great assistants" like Bill Alex or former wing man Scott Radecki for their insights and collaboration.

"They're enormously helpful to the situation, and if it weren't for them, I would not be here," he remarked.

Swapping stories at the NHSACA convention was a special reward.

"It was just incredible to see the resumes of the coaches there and to see what they're doing," he said. "It was great to meet some legendary coaches." 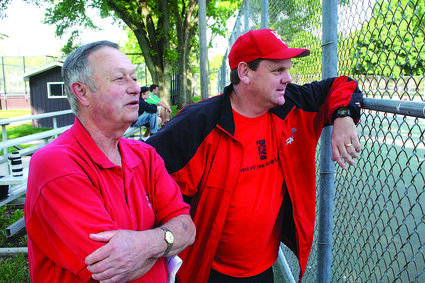 Naisbitt hopes his legacy is as a coach who continued Central's winning tradition while providing student-athletes with an enriching experience beyond the score.

"I'd like to think that I got the player to buy into the program and to want to come to practice and to want to win titles and have fun along the way."

Here are some of John Naisbitt’s accomplishments in his 12 years as head boys varsity tennis coach:

• two-time IHSA Coach of the Year