Preservationists worry home at 121 S. County Line Road could be sold to a builder 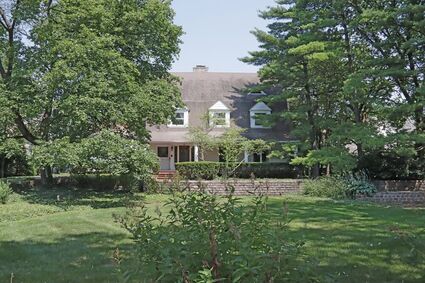 Preservations hope to find a buyer interested in renovating this Frank Lloyd Wright home at 121 S. County Line Road. The home is an example of the architect's early work, according to the Frank Lloyd Wright Building Conservancy. (Jim Slonoff photo)

Hinsdaleans for Historic Preservation and the Frank Lloyd Wright Building Conservancy are hoping to save the Frederick Bagley House at 121 S. County Line Road.

The conservancy sent out an email about the 1894 home Friday, indicating the "unique and irreplaceable early work" of Wright's was being marketed by @properties to a limited audience and was at risk.

"The house has no legal protection, and it would appear the audience for this sale is primarily developers who would demolish the house in order to build a larger house," the release states. "This practice is common in Hinsdale and has already happened on the lots immediately to the north and south of the Bagley house."

The five-bedroom, 3.1-bath home was listed at $1.3 million, according to Google search results. But the link to the actual listing is no longer active.

Alexis Braden, a Hinsdale Historic Preservation commissioner and founder of the Hinsdaleans for Historic Preservation Facebook group, said she learned from a real estate agent friend that the property had gone on the market and notified the conservancy, with whom she had had conversations in 2019.

"We were worried it would only attract buyers who weren't able or willing to rehab it and were only looking at it as land," she said.

The use of the phrase "as is" in the description led her to one conclusion.

"Knowing Hinsdale, land is really valuable and it looked like an attractive piece of land for a builder or a developer," she said.

Several concerned parties emailed the village over the weekend, worried the home could be facing demolition, the village website states. The property is not designated as a local landmark and is not located in the Robbins Park Historic District.

"121 County Line Road in Hinsdale will present a unique opportunity for a renovation or restoration of a Chicago-area home originally designed by Frank Lloyd Wright with modifications made throughout its history," the statement read. "Contrary to reports, the home is not being marketed as a teardown and is not being sold via auction. The property will be listed publicly for sale later this year."

The village will continue to monitor the situation and will provide assistance to encourage preservation, its website states. Residents with questions are encouraged to call Bethany Salmon, village planner, at (630) 789-7035 or email her at [email protected]

The Dutch colonial was originally designed for Frederick Bagley, a marble importer. The first floor plan of the main block of the house is similar to that of Wright's own 1889 home in Oak Park, and its octagonal library is a precursor of Wright's 1898 Oak Park Studio library, according to the conservancy.

"The vulnerability of this significant work of an architect of recognized international importance demonstrates the precarious status of historic structures in affluent areas," the conservancy's release states. "The Bagley House is a vital part of Wright's canon and its loss would be tragic for the Wright community, historians and architecture lovers everywhere."

Braden said she and other preservation commissioners are working hard to revise Title 14 of the Hinsdale Village Code with the hope of preserving historic homes like this one.

As for the Bagley house, she hopes to call attention to the property nationwide and "find a buyer who doesn't necessarily live in Hinsdale but wants to work to preserve it."