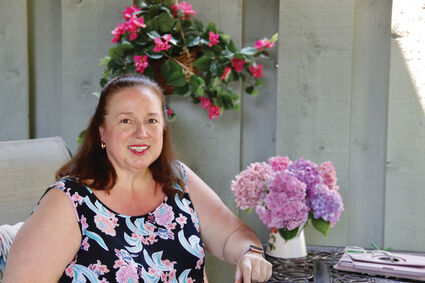 Singer Patricia Hurd had just returned to Chicago from a multi-year working tour of Europe in the late 1980s. She needed to earn some money before pursuing a new opportunity across the Atlantic.

Then Hurd got word auditions were being held for the runaway Broadway hit "Phantom of the Opera."

"It was like 'Hamilton' was the first year. You couldn't get tickets to save your life," Hurd remarked.

She gave it a shot.

"I went in literally 36 hours after I'd gotten back from Europe," Hurd recounted. "I wound up with the role of Carlotta, the opera's diva a and the second lead. It was just a whirlwind."

For the better part of the next decade she inhabited the part, logging more than 2,000 performances in Chicago and around the country.

"Boston, Detroit, Washington D.C. - I met two presidents and sang at The White House for the Clintons," Hurd said. "Singing at The Kennedy Center was a thrill."

She was brought in to join the Broadway company before the show ended its run.

"That was my one shot at being, like, a star," Hurd said of the experience.

Growing up in a music-loving household, Hurd said she aspired to be Barbara Streisand.

"There were a lot of talented musicians in the family, although nobody professional," she related.

Hurd gravitated toward classical music, attending Interlochen Center for the Arts summer camp in Michigan and earning a music degree from Northwestern. After graduating, she proceeded to take any vocal gig that came her way.

A big break came when operatic bass Jan-Hendrik Rootering, in town performing with the Lyric, connected Hurd with his New York agent. To boost her profile, the agent sent her to Europe.

"I made my debut at the Aldeburgh Festival in England in 'Don Giovanni'. It's a very prestigious festival, I was very lucky that I did that," she said.

By the end of her 'Phantom' run, Hurd was ready to put down roots. A friend's cat-sitting request near Hinsdale brought her here. An invitation to sing at Union Church led to an opportunity to teach a masterclass at Hinsdale Central.

"I found that I love the high school kids," she said.

Soon she was teaching at Central two to three times a week. Word spread and she gained students from other area schools. She stayed at Central for 20 years before deciding to give lessons out of her home studio.

"You get something out of teaching. It gives back to you," she said.

The pandemic required her to conduct virtual sessions, which Hurd noted is not ideal for operatic vocal instruction.

She enjoys seeing her pupils spread their melodious wings as she did.

"I think you have to be so dedicated, because it's a difficult life and it's difficult to succeed," Hurd said. "I just loved making music."