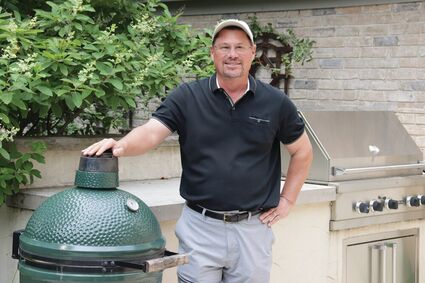 Avid griller Dave Schwalb said grilling is a great way to entertain in summer, but he doesn't limit his outdoor cooking to just one season. He uses his grill and smoker to make meals for his family and friends year round. (Jim Slonoff photo)

Married to a professional chef, David Schwalb wasn't about to compete with his wife's kitchen skills, so he took his cooking game outdoors.

"If it's something to be barbecued, it's my area," said Schwalb, who has been perfecting the arts of grilling and smoking for about 10 years. His primary tools are a gas grill, which he uses for grill jobs, and a Big Green Egg for smoking meats.

"Ribs are probably my favorite thing to do," Schwalb said. This specialty dish requires the use of both the grill and the smoker.

While the grill is great for quicker things, like burgers, chicken, steaks and fish, the Big Green Egg is Schwalb's tool of choice for things like pork shoulder.

"That's kind of an all-day affair," he said.

When smoking meat, the quality of the cut isn't of utmost importance, said Schwalb, who tries to buy local whenever he can. Even a tough cut will be tender after hours of slow cooking on the smoker, he said.

The Big Green Egg maintains an even temperature for a long period of time, making it ideal for foods that require slow cooking. But Schwalb said his egg also makes a great outdoor pizza oven. Set to a high temperature, the Big Green Egg adds flavor and a crispy crust in about 4 minutes, Schwalb said. He's even used it to kick up the flavor of a pre-made pizza.

When it comes to rubs and sauces, Schwalb likes to kick up the heat a bit with peppers, smoked paprika or cayenne powder. Sometimes, he makes his own, but he also likes to try interesting flavors from the store shelf. Experimenting is part of the fun, he said.

Now that he's perfected his rib game and become comfortable with things like chicken and steak, Schwalb said his next step is fish.

"I want to start grilling more fish. That's one of my favorite things to eat," he said.

As for those just starting out as outdoor cooks, Schwalb has three bits of advice.

First, don't be afraid to smoke meats for a long time. Removing the meat too soon is a common mistake.

"You want to let it rest for a good 10 or 15 minutes," Schwalb said. This allows the juices to pool inside, making the meat more flavorful and keeping it moist.

"Even if it's not perfect, people appreciate that you're cooking for them," Schwalb said.

Urban Loggers Club began selling wood for backyard fires in spring 2020, just around the time that most Americans were spending a whole lot more time at home. It wasn't long before they branched out to also offer smoked woods for outdoor cooking.

Adam Dremak is co-owner of Urban Loggers Club, which sells its smoked wood chunks at the Hinsdale Farmers Market every Monday. Available in a variety of woods, including oak, hickory, cherry, apple, pecan and bourbon oak, Dremak said the wood chunks add flavor to just about anything that can go on a grill or in a smoker.

"They can be used in any type of fire," he said, including gas grills, charcoal grills and smokers.

Dremak said there are no steadfast rules when it comes to smoking meats. While he prefers a fruity wood for pork, there's no reason not to try hickory or oak.

"There are many different ways that people choose to smoke their meats, and there's really no right or wrong way to do it," he said. "It all comes down to preference."

Pork butt and beef brisket are two of Dremak's favorite things to cook using Urban Loggers Club woods. The secret is to cook the meat at a low temperature for a long period of time. He suggests a guideline of one hour per pound of meat, cooked at 200 to 250 degrees.

"Always allow for more time than you think you will need," Dremak said.

When smoking meat for the first time, Dremak's advice is to start small. Purchase a 2- or 3-pound brisket or pork butt, and allow yourself the freedom to mess it up. Experimentation is part of the process, Dremak said.

"Good mistakes happen. Sometimes, it can turn out even better than you thought," he said.

These key ingredients create the perfect meat rub, according to grillmaster Dave Schwalb.

Mix ingredients to taste and make plenty to have on hand.