Devils turn up heat in Cooperstown 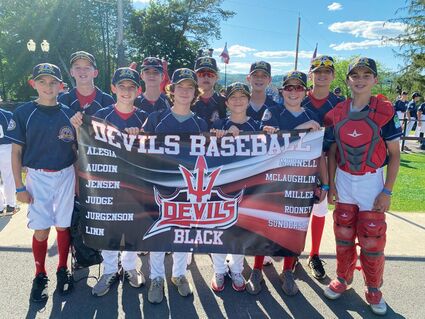 A Hinsdale Devils 12U youth travel team journeyed to Cooperstown, N.Y., for a week-long tournament last month, blazing their way through victory after victory against a roster of squads from around the country.

Head coach Ryan McLaughlin said the week was one to remember.

"The kids played well," said McLaughlin, whose 12-year-old son, Luke, is on the team. "I would venture to say that there hasn't been a team that's done that well (in Cooperstown) from Illinois."

McLaughlin expected his crew would be competitive, but he had no advance scouting reports by which to assess their opponents.

The top-seeded Devils finished the preliminary pool play rounds with a spotless 6-0 record, beating teams from states including Colorado and South Florida.

"It was pretty crazy how well we were playing," McLaughlin remarked. "We gave up only five runs in the first seven games. We were playing good defense and pitching well and scoring a lot of runs."

That provided a head of steam going into the bracket portion, momentum the boys needed in their second game upon finding themselves down a run going into the bottom of the final inning.

"It was probably the best baseball experience of my life," Charlie said of Cooperstown.

Another highlight was the back-to-back-to-back homers in a game by Brayden Jurgenson, Owen Sunderson and Bobby Jensen.

"After that happened, we kind of realized that we were one of the better teams," Bobby said.

The Devils defeated a California side in the semifinal before falling 3-7 to a team from Houston, Texas, in the championship. It is the furthest a Hinsdale team has made it in the tournament and one of the best performances for an Illinois representative.

"It doesn't matter what state you're from. We thought we were going to get smacked by USA Elite from California," Owen said.

The team finished the week having registered a staggering 32 home runs and three no-hitters in 10 games, according to McLaughlin. Every player had at least one round-tripper.

"We got really strong as a team, just mentally, and we were able to play our hearts out," Bobby said.

Teammate Cam Linn said he and his cohorts were not satisfied just to chalk up Cooperstown as a rite of passage.

"We had just one main goal: to win the whole thing," he said.

Players said they were also energized by the fellowship forged, both with one another and their counterparts on other teams all clustered together in bunk houses within the sprawling complex.

"As you got toward the end of the week, you're playing against teams that may have been staying in the cabin next to you," McLaughlin said. "It's a little bit like a baseball camp."

The first day was even dedicated to building camaraderie, with a pin trading session for the youth to exchange mementos.

"We met a lot of new people," Bobby said.

The team also paid a visit to Cooperstown's claim to fame, the Baseball Hall of Fame.

McLaughlin said each day's schedule was well arranged, although he did try to ensure players were staying game-ready.

"You really just had to kind of get them drinking lots of water," he said, noting the muggy weather conditions.

His goal heading into the week was to execute good baseball.

"I didn't know what to expect. I wanted the boys to just play well and, regardless of their record, be proud of how they played," McLaughlin said.

That vision sharpened a bit after they swept pool play.

"We were playing too good to get bumped out in the first round of the bracket play," he said.

Players said they felt like minor celebrities once they reached the title game.

"People we didn't even know knew us and wanted to watch us play," Max said.

Many of the team members also play for their in-house Little League programs, a duality that creates rifts in some towns. But this community has made it work

"It's a real symbiotic relationship between the two," said McLaughlin, who is an assistant coach for the Hinsdale Little League All-Stars.

Parent Jill Sunderson said being able to participate in the tournament after all of the pandemic-related cancellations was special.

"It's great to see these 12U kids head to Cooperstown again and represent Hinsdale baseball in our town, where baseball is so loved," she said.

McLaughlin said the opening of the Devils program three years ago to all kids within Hinsdale Central feeder communities has fueled its growth and success.

"It's kind of testament to the local community," he said.