The 4x400-meter relay team of Isa Hitchens, Aden Bandukwala, Piyush Mehta and Dan Watcke earned a first-place medal at the IHSA state track meet last month, and Watcke captured the title in the 800-meter run. At the girls meet, Catie McCabe placed fourth in a very fast 1,600-meter run. Her time was the 10th fastest in 3A history. (top photo by Dan Chamness, bottom provided by Mark McCabe)

Watcke is only the second male athlete to win a state track championship for Hinsdale Central.

Watcke, who was undefeated in the 800-meter this season, won the title June 19 at Eastern Illinois University with a time of 1:54.24.

"He ran a race two nights ago, a post-season race, and he ran even faster," Lawrence said Wednesday. "He's the fastest sophomore in the country right now.

"Needless to say, we've never coached an athlete quite of his caliber before," he added.

Coaches were confident Watcke could bring home the state title.

"We're also seasoned enough to know crazy things happen at the state track meet," Lawrence said. "There's chaos. There's people falling down in front of you. There's people getting disqualified. We figured as long as things ran smoothly, he would emerge victorious."

Watcke went into the race knowing he was the guy to beat.

"I could really feel - not the pressure - but just knowing that everyone was gunning for me," he said. "It also ended up playing out in my favor."

The race started slow but closed fast in the final 400 meters, he said.

"I pretty much had control of everyone's race and mine," he said.

A little more than an hour later, Watcke earned his second state title as the anchor of the 4x400-meter relay. He and seniors Isa Hitchens and Piyush Mekla and freshman Aden Bandukwala won with a time of 3:19.48. Helping Hitchens and Mekla end their high school careers on a high note was a strong motivator, Watcke said.

"I was honestly more nervous for the 4x4 than I was for the 800," he said. "We knew we had to get it done for the seniors. It was their first and their last state meet."

Hitchens pulled his hamstring in early May, and a back injury dating back to last year almost prevented Mekla from running track, Lawrence noted.

"Isa and Piyush, they have been through so much with the pandemic and just keeping their faith and sticking with the team," Lawrence said. "To see them finish their season on the most perfect way possible, it's such a happy story."

Watcke revealed it was Mekla who doused Lawrence with a celebratory bucket of Gatorade for one of the most memorable moments of the meet. Lawrence said he snuck onto the track right after the race ended.

"I got to be the first coach to embrace the guys after their relay. I don't know which one of them dumped Gatorade on me, but it was pretty amazing," he said.

With two underclassmen on the relay, Watcke said the groundwork is set for competitive 2022 track and cross country seasons.

"Obviously I think that gives not only me but the whole team a lot of confidence," he said. "Everyone is very motivated after seeing the performance that the relay and I put on at the state meet."

Mark McCabe, girls track distance coach and Catie's father, said via email that he joked with his daughter that it took state meet-record times by the top-three finishers to beat her.

"The race was by far the best 1,600-meter race in Illinois history," he said.

The meet at Eastern Illinois University featured a lightning delay of more than four hours right before the 1,600-meter race, Mark McCabe recounted.

"The runners were warmed up, in the tent and being given final instructions," he said, pushing an originally scheduled 4:45 p.m. race to 9:30 p.m. "The good thing was that weather had gone from 90s, humid and pretty miserable, to virtually ideal after the storms."

He said Catie is the fifth Central girls track member in recent years to run the 1,600 in 4:55 or faster, a notable achievement. 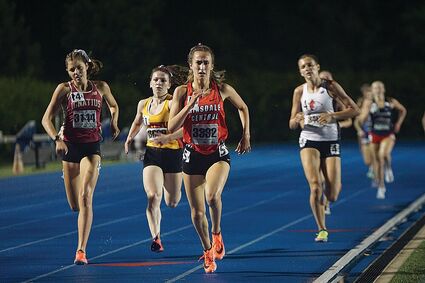 "Just getting on the Top 10 list in the 1,600 at HC is quite an accomplishment, much less a school record," he said. "As far as I know, that's a consistency of excellence unmatched in our state."

Junior Matthew Cihlar placed 13th in the all-around competition with a score of 50.5 at the state gymnastics meet May 14-15 at Hoffman Estates High School.

His highest finish was in vault, where he came in fourth with a 9.1. He placed between 15th and 19th in floor exercise, pommel horse, still rings, parallel bars and high bar.

Junior Chris Reyes placed 32nd in pommel horse with a score of 6.5.