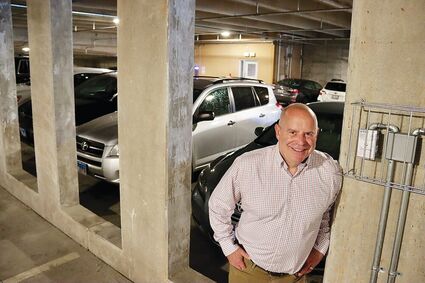 The year a teenage Brad Bloom reported to his first day of work at the Village of Hinsdale, the country was celebrating its bicentennial, Steve Jobs and Steve Wozniak formed the Apple Computer Co. and folks were flocking to theaters to see the first film in what would become the "Rocky" franchise.

Forty-five years later, Bloom is still coming to work in Hinsdale every day, and he wouldn't have it any other way.

"The days are full and the pace is fast, but I like it," said Bloom, who, after 32 years with the village's police department, including 14 as chief, accepted the job of assistant village manager and director of public safety in 2016.

The scope of his current job is broader than his previous police role, he said, with fewer clear-cut protocols.

"I handle most of the calls that are exceptions," Bloom said, such as a homeowner's request to host a backyard band or a business seeking special land use.

But in the end, this role, like all of the others he's held, is about making the village a safe and comfortable place for residents.

A native of Clarendon Hills and a graduate of Hinsdale Central High School, Bloom has never lived within the village that he's worked in and supported for most of his life.

After starting out as a 911 operator and community service officer during high school and college, Bloom spent two years with the Willowbrook Police Department before the chance arose to return to Hinsdale as a police officer.

"This is where I wanted to be," Bloom said.

Even after decades on staff, Bloom said he is learning new things every day, including how projects are bid and how the water system works.

"It's really invigorating to try something new and to learn new things," he said.

Topping his list of accomplishments as assistant village manager is the construction and opening of the downtown parking deck. Bloom led the team of construction personnel, utility crews and village staff to finally see the decades-long vision become reality.

"I think we're all very proud of the result," he said.

Next up is managing the Tri-State Tollway expansion's impact on Hinsdale businesses and residents. Plans to widen Interstate 294 and to eliminate the over-the-road portion of the Hinsdale Oasis will mean noise walls need to be moved and sales tax revenue could be lost.

"The oasis is actually within the village of Hinsdale," he said.

Bloom works closely with the Hinsdale Chamber of Commerce, attending board meetings and listening to members' needs and concerns. Being accessible to field questions, address problems and make decisions is all part of the job, and nothing new for Bloom.

Bloom lives in Downers Grove with his wife of 37 years, Deanna. They have three grown children and two grandchildren.