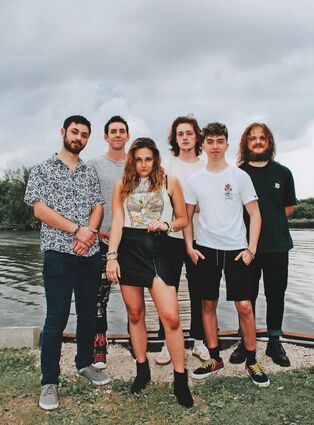 Locally rooted band The Millenials will entertain the crowd tonight as the popular summer concert series Uniquely Thursdays kicks off its 2021 season in Burlington Park, a welcome sign of the community's continuing recovery from the pandemic. (photo courtesy of The Millenials; file photo)

Thursday is about to resume its place as everyone's favorite night of the week in Hinsdale.

The concert series Uniquely Thursdays is back, offering, in addition to live music, local food vendors, beer and wine, and walkable access to all downtown Hinsdale has to offer.

"Everyone is excited," said Eva Field, president and CEO of the Hinsdale Chamber of Commerce.

While other towns are scrambling to create summer fun for their residents and neighbors, Field said the chamber's proactive thinking, and a little bit of good luck, has Hinsdale primed and ready for a full 10-week season of outdoor performances.

"Hinsdale is on the map," she said.

Field said the chamber decided several months ago to delay the start of the concert series by two weeks, hopefully giving the pandemic just a little more time to wane.

"Not knowingly, we opened up the state June 11," Field said, just 13 days before The Millennials are set to take the stage and kick off Uniquely Thursdays' 2021 season.

The Millennials lead guitar player Michael Henehan said it's exciting to be back where it all began, playing for the fans in Hinsdale. The six-member band got its start when its original members were students at Hinsdale's School of Rock. Six years later, some faces have changed, but the band's ability to entertain a crowd with classic rock songs and modern hits has only gotten better. Henehan said the Hinsdale show is one of 22 that the band has booked across the Chicago area this summer.

"I'm so excited to be back," Henehan said. "Hinsdale is always a great crowd."

Uniquely Thursdays will continue every week through August. Guests are invited to pack a picnic, or grab dinner from one of the event's vendors. Azteca, Giuliano's Pizza, Tropical Sno, Dippin' Dots and Sugar Mama's Mini Donuts will all be part of the festivities. Along with its fried dough specialty, Sugar Mama's will have a second truck offering hot dogs, lemon shake-ups, cotton candy and other treats, Field said.

Grownups in the crowd can enjoy a cold beer or a glass of wine while listening to the music on the main stage. New to the taps this year is Revolution Brewery's Anti-Hero IPA. Guests also can choose a Leinenkugel Summer Shandy on tap, or a can of Miller Lite or Coors Lite. Wine lovers can sip a Noble Vines chardonnay or cabernet sauvignon, or a Gnarly Head pinot grigio. Black Cherry White Claws also will be available.

Claudia Thornton, the chamber's marketing director, said the 10-concert series includes something for every musical taste. Fans of Elton John and Billy Joel won't want to miss tribute band Billy Elton on July 1, and reggae enthusiasts can chill out to the beats of True Company on July 8.

The Student Body will bring back the hits of the '80s and '90s on July 15, followed by Karma Committee putting its spin on hip hop, R&B, rock, pop and dance tunes on July 22. July 29 welcomes This End Up, which promises a mix of pop, rock and a touch of country. Thornton said country music fans will enjoy the Ethan Bell Band, set to take the stage on August 5. Fan favorite 7th Heaven is sure to draw a crowd on August 12.

New to the Uniquely Thursdays lineup is Reckless, a high-energy rock band scheduled for August 19. Closing out the 2021 season on August 25 is Semple Band, with a collection of tunes from the '70s through today.

Kramer Foods will donate bottled water, which will be sold at the event for $1. Proceeds from bottled water sales help to offset the costs of the weekly summer concerts, Field said. She also thanked top sponsors Jameson Sotheby's, Hinsdale Bank, Band & Wire Orthodontics, and LaMantia Design & Remodeling for their support.