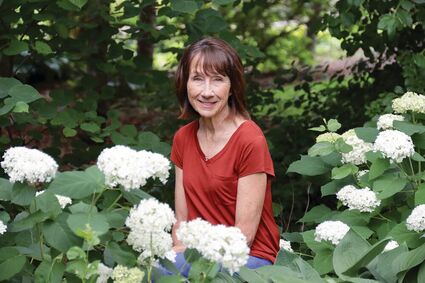 Hydrangeas (left) and hostas are among the many horticultural highlights featured in the gardens at Janet Roxworthy's Hinsdale home. Along with her extensive collection of perennials, Roxworthy likes to mix in a few annuals to give her gardens an extra pop of color. (Jim Slonoff photos)

With flowers as the palette and her yard as the canvas, Janet Roxworthy thinks of her garden as a painting in progress.

Her yard is filled with ornamental grasses, knockout roses, coneflowers and coral bells. Hostas and ferns add life to the shady spots, and hydrangeas, lavender and clematis add dashes of color.

While perennials are her favorite things to grow, Roxworthy branched out into vegetable gardening just a few years ago. In her 4-by-4 plot, she grows tomatoes, green beans and whatever she feels inspired to try. Easy-to-grow herbs add interest to Roxworthy's garden and flavor to her food.

"I try to incorporate them into my summer cooking," she said.

"Hinsdale has some of the most beautiful gardening vignettes you will see anywhere," said Roxworthy.

Roxworthy said much of her interest in and knowledge of gardening came from a former neighbor who inspired her to begin her own outdoor sanctuary. Now, Roxworthy trades tips and tricks of the gardening game with fellow members of the Garden Study Club of Hinsdale, including Mary Ann Parks.

After 20 years of digging, potting and planting, Parks said she still considers herself an amateur gardener.

"I absolutely do it as a hobby," said Parks, whose garden contains more than a few blooms obtained at the Garden Study Club's annual plant sale.

"You can find unusual plants to add to your garden," said Parks, who helped organize the sale this year.

Held each spring, the sale allows members to find new homes for the perennials that are in need of dividing. Money from the sale helps the club care for the garden outside the Hinsdale History Museum on Clay Street.

"We also make donations to the village of Hinsdale," Parks said, including the new crab apple trees along the train tracks.

Much of Parks' own property is filled with perennials, but she also finds room for herbs, vegetables and the occasional horticultural experiment.

After successfully growing birdhouse gourds a few years ago, she added loofah gourds to her repertoire last summer.

"That was a fun project," she said.

Part of what makes any gardening project fun is the fact that failure has no serious consequences, Parks said. If something doesn't work, she just tries again. 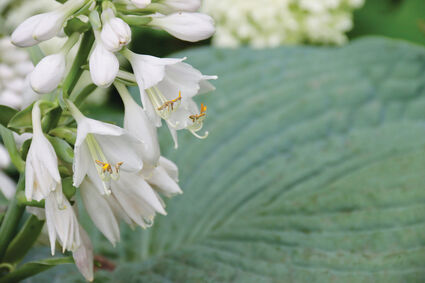 Parks said she likes to supplement her perennials with sprinkles of seeds that turn into colorful zinnias, hollyhocks and marigolds.

"You can just sprinkle them where you have any bare spots," she said.

From April to September, there's always something blooming in Parks' gardens. With her favorite flowers, peonies, finished for the season, it's now time for daylilies, yarrow, bee balm and shasta daisies.

Even the most carefully planned garden can sometimes offer surprises, such as the echinacea that made an unexpected comeback this year, or the rusty horseshoe that Parks found while digging in the soil. It's now a part of her lawn's decor and a reminder of the many people and plants to which her yard has given life through the years.