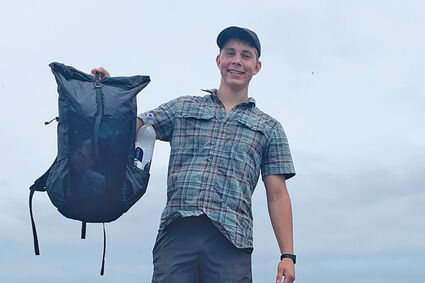 William Seppanen stands atop Mount Katahdin, the highest point in his 2,200-mile hike of the Appal-achian Trail. (photos provided)

A long walk can be a great way to sort out one's thoughts and make plans for the future. During his gap year between high school and college, William Seppanen of Hinsdale did just that.

After graduating from Hinsdale Central High School in 2020, Seppanen spent much of the next year hiking all 2,200 miles of the Appalachian Trail. Starting out in Maine, Seppanen had made his way to West Virginia by the fall. After the snow had time to thaw, he hiked the other half this spring, starting out in Georgia and ending in Harper's Ferry, West Virginia.

Seppanen said he caught the hiking bug during summer camp in North Carolina, which introduced him to the Appalachian Trail and planted the seed for his future endeavor. After attending the camp every summer since sixth grade, he hiked a 100-mile chunk of the trail the summer after his junior year.

"It really made me have a love for the Appalachian mountains," he said, and it was then that he promised himself he would return to hike every inch of the Appalachian Trail.

"It's not a wilderness experience," said Seppanen, although he relied on nothing more than a tarp for shelter most nights. A popular hiking destination, much of the Appalachian Trail is crowded with hikers, Seppanen said, so supplies and help, if needed, are never far away. Hiking about 20 miles each day, Seppanen made frequent stops in towns along the way to stock up on food and enjoy an occasional shower.

With his Appalachian Trail endeavor behind him, Seppanen is wasting no time taking on his next conquest - a 500-mile hike from Denver to Durango, Colo.

"I'm going to be hiking the Colorado Tail," said Seppanen, who plans to begin his pursuit June 21.

Having hiked the East Coast and Midwest, this mountain trek promises to offer some new challenges. Seppanen said he's prepared for the effects that altitude will have on his hike, as well as exposure to the elements. Unlike the trees and foliage of the Appalachian Trail, the Colorado Trail offers little in terms of natural shelter.

He'll carry a tent, and with nights that can fall below freezing, he'll pack layers of clothing along with plenty of sunscreen to protect him during the heat of the day. Seppanen said he expects this hike to be a bit more solitary than the crowded routes of Appalachia. And that's OK with him. He prefers to hike alone.

"It's a really freeing feeling to wake up in the morning and know I can make anything I want of the day," he said.

Most of those days consist of 10 to 11 hours of hiking that sometimes last into the night. Along the way, he spends time with his thoughts and with nature.

"I also listen to music and a lot of podcasts," Seppanen said.

He hopes to tackle the Colorado Trail in three weeks, leaving himself plenty of time to enjoy a bit of summer and to prepare for his first semester at University of Utah, a place that promises plenty of opportunities for hiking, rock climbing and more.

"It's really the ideal place for outdoor pursuits," Seppanen said.

Best vacations are enjoyed on foot

Hinsdale resident Steve Arens has been finding new trails to explore since he embarked on his first hike in the White Mountains of New Hampshire several decades ago. He said there's no shortage of places close to home to enjoy on foot.

With their children grown, Arens said he and his wife, Marge, are rediscovering their love of hiking and recently spent three days hiking and camping in Starved Rock State Park. During the COVID-19 pandemic, the couple found spots within driving distance where they could spend their days hiking and their evenings camping and preparing their own food, sometimes catching their own fish.

Now that restrictions have been lifted, Arens said they are looking forward to once again exploring places farther from home.

"You can really experience the breadth of the country," said Arens, who has trekked the Tetons of Wyoming, the Badlands of South Dakota and Michigan's Upper Peninsula, among 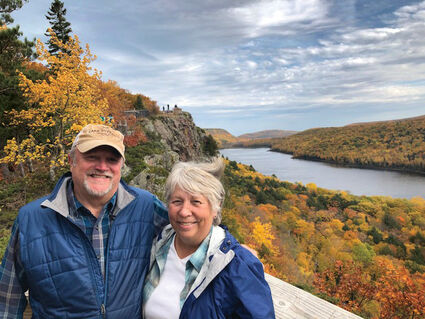 Steve and Marge Arens stop for a photo at the Lake of the Clouds Overlook in the Porcu-pine Mount-ains in Michi-gan's Upper Penin-sula.

No matter its primary purpose, every trip becomes a hiking trip for the Arenses. When the couple traveled to Costa Rica for a family wedding, they tacked on several days for hiking. When visiting their daughter at school in New York, the couple found places close to campus to log their walking miles.

"Our trips aren't complete unless we get a good hike or two in there," Arens said.

Their long walks give the couple time to unplug. Sometimes, they talk. Other times, they just listen to the birds and the world around them.

Having walked the country's national parks, the Alps of Switzerland and spots across Europe, at least one spot remains on Arens' list of unexplored territories. One day soon, he said, he would like to hike in a spot that allows him to see the Northern Lights.

Closer to home, Arens said they enjoy walks through Fullersburg Woods Forest Preserve and the Palos Trails of Cook County. Far away or right next door, hiking offers exercise for the body and rest for the mind.

"It's just nice to take some time and get away," Arens said.