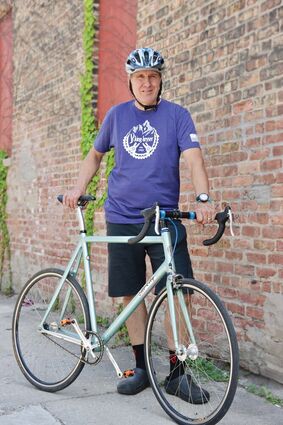 In 2019, Tim Hansen had a wedding coming up. It was his daughter's, but the father of bride had his own vision for the big event.

"I actually was about 400 pounds," said the longtime Hinsdale resident who recently moved to Oak Brook with wife Jande. "I wanted to look good in the pictures, and I needed exercise."

Hansen turned to cycling, an activity he enjoyed in his youth before life's demands steered him away. He went to Hartley's Bike Shoppe - among its last customers before it closed two years ago - and got assistance finding a suitable model for his large 6-foot 6-inch frame.

"It had to go through some modifications because my weight was popping spokes," said Hansen, who tried to ride every day the weather permitted. "I just really got into it. I would basically go on my bike with a couple of (audio)books on my phone and wear one ear piece and use other ear for hearing traffic."

Along with watching his diet, the fitness regimen worked.

"She got engaged in March and got married in October, and I lost 70 pounds in seven months, pretty much bicycling every day," he said.

Ari Andonopoulos, bike mechanic at Hinsdale's King Keyser - who previously was shop manager at Hartley's - said he prefers two wheels to four for his commute from Westmont, especially this season.

"When the weather's nice, I get up earlier, go for a longer ride, come (to work) and wash up," Andonopoulos said. "I try not to use my car in the summer at all."

The New Jersey native started cycling seriously at age 18, though he became hooked well before then watching Tour de France footage on TV.

"My parents bought me a bike and I just became enamored with the freedom that cycling gives you to go places and explore and clear your mind," he related.

Andonopoulos graduated to a road bike in high school and recalled a 150-mile daylong excursion he undertook.

"I went all the way to the New York border and then I came all the way back down. It was a crazy adventure," he recounted. "I gave myself really good cramps, and then I stopped at a Burger King and got food. Then I made it home."

During the conversation, "Trapper Tom" of Westchester strides into King Keyser in full cyclist kit. The two have been cycling cronies for decades, illustrative of the close-knit fellowship that avid riders often share.

"I've been racing since I was 25. I'm 66 now," Trapper Tom said, acknowledging the injuries he's incurred. "It keeps you young."

Falls and accidents go with the territory, Hansen said, the reason he never leaves his helmet behind. And why he prefers trails separated from vehicular traffic to the roads favored by pack riders.

"My goal is to look good some day in one of those outfits," he said with a laugh.

The winter after the wedding saw Hansen's 21-gear Electra Townie go into hibernation until COVID gave him new motivation - the specter of co-morbidity. He was able to escape to Florida for a couple months and get the wheels turning again.

"Since COVID hit, I've lost 115 pounds," he said. "I got out of obesity and my blood pressure went down."

He enjoys riding along the Fox River and up near the family's Michigan summer home. The south part of Chicago's 36-mile lakefront trail, which he rides every few weeks, ranks near the top.

"You don't have all the kids trying to show off to all the girls, and you don't have multiple lanes, you've got one or two lanes," Hansen said.

Andonopoulos, who's been a bike mechanic for 30 years, said his collection has expanded significantly since that first orange, banana-seated Sears edition he had in New Jersey.

"At home, we have over 30 bikes for the three people in my house," he remarked, saying his wife and most of his adult children ride.

He welcomes advances in electric bike design as a source of supplemental power when their aging bodies struggle with inclines. 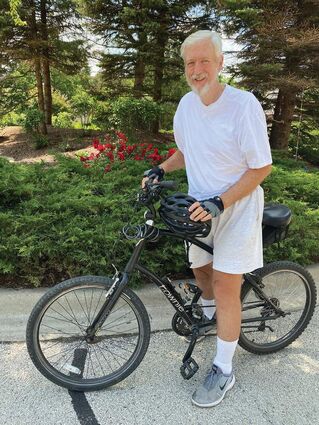 "They're going to eventually become cheaper and lighter," Andonopoulos said, adding that people need to modify or change bikes as their posture and positioning evolve. "You have to adapt because you become less flexible as you get older."

Hansen endeavors to rides around Lake Michigan one day, and enjoys being an evangelist for the sport to others looking for a low-impact workout.

"Motion is lotion," he quipped.

Or just to get away, as Hansen and his daughter do when they roll to the Adler Planetarium and sit on the shoreline rocks.

"It's got the most beautiful scene of the city, so we call that 'our spot' whenever we've got something to talk about," he said.