Wizards ready to work their magic 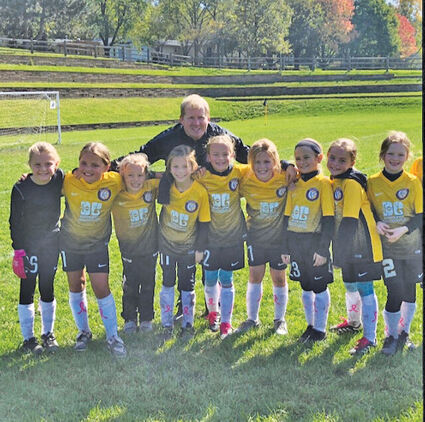 Dean Harding has been coaching the Wizards Diamonds soccer team since they were under 8s. The team - now U11 - will play in the state cup semifinals at 3:30 p.m. Saturday near Rockford at the Sportscore, 8800 E. Riverside Blvd., Loves Park. If the girls win Saturday, they will play Springfield or Galaxy at 4:30 p.m. Sunday. (photos courtesy of Harding)

Three years ago, members of the Wizard Football Club girls soccer team were in the finals of a tough North Shore tournament. At halftime, the score was 3-0. Coach Dean Harding gave the girls a pep talk, encouraging them to have fun, and sent them back out on the field.

They scored three goals and won the game in a shoot-out.

"That's when I knew, at that point, that I was head coach of something really special," Harding said.

Now the 14 members of the U11 Diamonds team are headed to Rockford to play in the state cup finals this weekend.

"They've built their way up to the top division in the Chicagoland area," Hardin said. "They are currently seeded second."

The team has had two wins and one draw en route to the semifinals. They will face their first opponent, a Peoria team, at 3:30 p.m. Saturday, June 5.

"Through background checks, this is the youngest team in the community to get through to the state cup semifinals," Harding said.

He is preparing the girls by passing along his own experiences over 34 years of playing and coaching. He helped produce 28 professional soccer players in Europe before moving to this country three years ago and is part of the Olympic development coaching staff. He's also a Clarendon Hills resident and the dad of team member Olivia.

Harding has been a huge factor in the team's success, said Katie Szafarczyk of Hinsdale, team manager and mom of Eleanor.

"A lot of it goes back to Dean and his amazing dedication to the club and our group of girls," she said. "He is humble. He doesn't give himself enough credit."

The girls' resiliency also has been key, Harding and Szafarczyk said.

"They've had their ups and downs and some of the games have been really tough," Harding said. "They've had to defend for their lives."

The girls have a great attitude and always support one another, Szafarczyk noted.

"Even if they have a bad pass or they miss a play, they are still laughing about it. It's no big deal," she said. "They do leave their hearts on the field, yes, but they also have such grace. They give themselves room to make mistakes but support each other through them."

Her daughter echoed her comments.

"I love my team and how we have a really good friendship and we always have each other's back," said Eleanor, who plays center midfield and is in fifth grade at Oak School.

She said she enjoys the opportunity to act as the team's spokesperson for her mom.

"I like how she asks me questions about how my team feels about certain things and what's my team's opinions about things," she said.

Elayna Stokes, a fifth-grader at The Lane, said the group is motivated to win and willing to put in the effort.

"We all have certain positions that we all like to play, so we work together in that way and we don't get upset if you lose. That makes you want to win even more.

"We all play together really well," she added. "We all have good relationships."

Her coach's advice has been for the girls to have fun and try as hard as they can. That's what she plans to do on Saturday.

"I like winning," Elayna said. "If we do win, then I really like that. Even if we don't, then I like just getting out there and trying and being out there with my team." 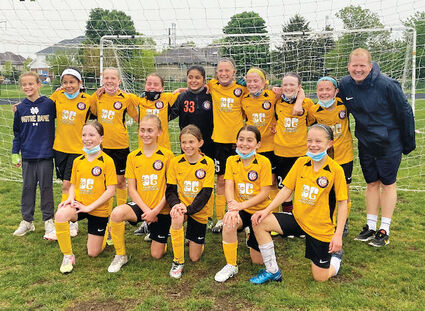 "I'm looking forward to playing with my team. We worked so hard from being really small and not knowing what to do to be able to play in a state cup," she said.

Harding said he hopes the stands will be filled with fans.

"I just want the community to come out and support them," he said. "This is a big thing. They win this, then nationals are next. This could be potentially huge."