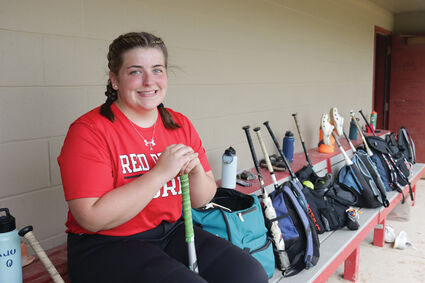 When did you first start playing softball?

First grade. My sister played and my dad coached, so I grew up watching it.

I just like being part of a team. It's really team-driven, and I like the game. I've always liked watching baseball and softball. Something has always drawn me to it, I guess.

Is it strange playing after graduation?

Just not to take every error or mistake too seriously. It's one thing - whether it's striking out or missing a throw or missing a pitch. There's always going to be a next one. You can't get in your head because getting in your head will make it worse. Just stay positive.

I'm a left-handed pitcher, which is not as common. That throws some people off. I've always been fairly proud of that.

What are your plans for summer and fall?

I am going to college at Miami University of Ohio (business major). My mom is part of a slow-pitch league with all of her friends. She wants me to play with them in the summer when our season is done, so I guess I'll be doing that for a little bit.

Why does coach Brittany Zust like having Grant on the team?

Mary attended our summer camps as a young kid learning the game and worked all through her senior year. Mary is a student of the game. She is constantly analyzing plays as if she was a coach. I think this is a large reason as to why Mary has found success in the game of softball. This mindset has assisted her in her pitching technique and ability to work the count as a hitter. As a teammate, Mary is always offering up advice to the underclassman on how to improve and understand the game. Mary has certainly left her mark on the HC softball program.