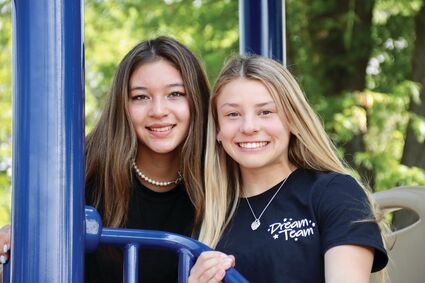 Hinsdale gymnasts Hannah Milton (left) and Olivia Giunta are close friends who got the chance to compete at the highest levels for their age when they qualified for the Region 5 meet in April, and there earned spots on the seven member national team that competed earlier this month. (Jim Slonoff photo)

Hinsdale's Olivia Giunta figured her dreams of qualifying for USA Gymnastics Level 10 Women's Development Program National Championships had slipped away as her hands slipped from the uneven bars at the regional meet in Cincinnati last month.

"That was the point where I got really stressed out," she said. "I thought that was going to be the end."

But it wasn't. Giunta was still in contention, with only her balance beam routine remaining.

"If I fell or had a major wobble on beam, I wouldn't have made it," said the rising Hinsdale Central sophomore.

The routine was solid.

"I just tried to stay calm and do what I do in the gym, and show (the judges) what I know how to do," she said.

Even sweeter was that fact that good friend, fellow Hinsdalean and rising Central junior Hannah Milton also landed herself on the seven-member Region 5 squad from among the 22 vying for it. The team competed at nationals in Daytona Beach, Fla., earlier this month.

Milton said she tried to enjoy herself at regionals.

"I just wanted to have fun and show the judges everything I've been training," she said. "That was my main goal."

But she admitted nerves kicked in at the start, as she was anxious about executing her Gienger Catch on the uneven bars, her first event.

"I actually caught in my routine, so that made me feel a lot better," Milton said. "I had a lot more confidence."

She performed well on beam, too, although she received an unwanted update that she was clinging to the seventh and final spot before her last vault.

"That was very nerve-wracking. It definitely threw me off," she said.

After some furious updating of the event's scoring app on their phones, the two learned they would be teammates. They had both trained at BIG Gymnastics before Giunta switched to Legacy Elite last year and were thrilled to be reunited to represent one of the country's eight regions. Region 5 covers Indiana Kentucky, Michigan and Ohio along with Illinois.

It was a joyful release following a disappointing 2020 in which postseason events were canceled due the pandemic and gyms were shut down for almost three months.

"Gymnasts don't take time off, ever. So having three months off was a big hit for everyone," Giunta said.

They each tried to stay in shape through group Zoom conditioning sessions until gyms reopened June 1. Summer is typically the season for acquiring new tricks.

"Last summer we didn't really get to do that because we were taking all that time just to get our old skills back," Giunta related.

They qualified for regionals through the state meet. Reaching nationals is the brass ring for every junior gymnast, they said, which ramps up the pressure.

"I would say it's more pressure than nationals," Milton remarked of regionals.

Earning a spot also entitles one to significant swag, from pajamas and bracelets to a suitcase and umbrella.

"Region 5 gives a lot of stuff to us, like way more than any other region," Giunta said.

"Which is kind of nice," Milton chimed in, smiling.

During the regular season, the rivalry between gyms can be fierce. But once the regional team is established, those divisions tumble away.

"When you go to nationals, all different gyms are coming together to be one (regional) team," Giunta said.

"It's more like competing together to win as a region," Milton said.

Unfortunately, Milton injured her ankles on a vault landing, forcing her to sit out nationals.

"I was training to see if I could compete, but it just hurt too much," said Milton, who was replaced by an alternate. "I still got to go to Florida and supported the team, and it was still a super-fun experience. And it's definitely motivation for next year."

Giunta said the so-called Region 5 "Dream Team" arrived at nationals May 13 and was able to bond by the pool and relax a little, since they didn't compete until May 16.

"Our group did pretty well considering we had to have two alternates come in," she said. "Our team got third among the regions. And one of our teammates got first, which was exciting for our team. It was just a really fun experience."

The validation of getting to nationals is a memory that will last, Milton noted.

"Everything that you worked for paid off, all the sacrifices and how hard it was," she said. "All the doubts go away because you're just so happy that you finally made it."