Couple falls in love with girl next door

Persicos buy, plan to renovate historic home after seeing it every day for six years 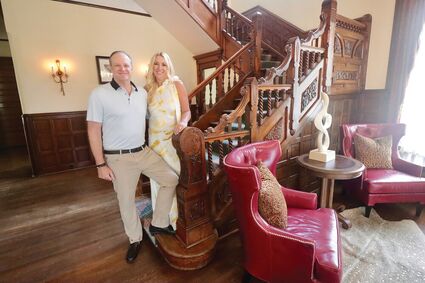 Andrea and Mike Persico said they didn't even have to discuss it when the house at 306 E. First St. went on the market. "It's probably a little bit more house than we would be desiring," Andrea said. "We're only four people. It's a little grander than we need, but it's so beautiful, we couldn't say no." The Persicos said they will work with experienced designers and architects to preserve as much of the 1890 home's original features as possible during a planned renovation. (Jim Slonoff photos)

Not many people would buy a house without setting foot inside.

But for Andrea and Mike Persico, the decision to purchase the historic Richardson Romanesque home at 306 E. First St. was an easy one.

"We were actually in Florida at the time and made an offer site unseen," Mike said, noting the home went on the market at the height of the first COVID-19 lockdown. "We just knew we wanted the home so much."

The Persicos were quite familiar with the home's exterior living next door at 121 S. Elm St. Andrea had been inside once, she said, in the six years they had lived in Hinsdale. They previously lived in a Chicago greystone.

"We loved having a house that had character and some interesting pieces to it," Andrea said of their former home. "When we moved here, we always loved this house. We always thought it was a beautiful house. It had such a presence in the neighborhood. When it became available, we felt we couldn't pass it up."

The home was built in 1890 for Elizabeth Grant, according to the first volume of Mary Sterling's "Hinsdale's Historic Homes and the People Who Lived in Them." Rumor had it she wanted to turn the home into a girls finishing school, but that never happened.

An early resident of the home was Mathias Rafftree, a well-known lawyer, who lived there five years. The Fetzers and Henry Regnerys owned the home from 1904-47 and 1947-66, respectively. In the 50-plus years since, it appears the home has had only four owners: R.A. Carlton, Irving and Pat Davis Fox, Patricia and Tom Murphy, and Rebecca and Joseph Varan, who sold the home to Mike and Andrea.

The Persicos, who just moved in a couple of weeks ago, are looking forward to raising their two children, Vincent, 10, and Lexi, almost 9, in the home. They also are anxious to begin renovations, once they have settled in. They anticipate the first phase of the project will take about 18 months.

They also are enchanted by the 14-foot ceilings, original woodwork, millwork and stained glass on the first floor and the porte cochere on the west side of the house.

"There are so many little features and details that aren't made any more," Andrea said.

They plan to preserve as many of the interior's historic elements as possible while making the home a comfortable place for their family.

"I think you can accept the eccentricities and beauties of a home but still make it modern, where it's interesting and fits today's lifestyle," Andrea said. "We're trying to bridge that gap."

The home already has many features that appeal to homeowners today, including a first-floor layout Mike describes as "very contemporary."

"You can't get a bigger family room than this (or) a wider open floor plan," he said.

And while an adult can't stand up straight in the first-floor powder room - something the Persicos plan to correct - the upstairs bathrooms are all en suite, Andrea said.

and adding a pool.

The Persicos already have received articles about the house and books in which it is featured, all unsolicited.

"People send us stuff all the time. This house evokes so much emotion," Mike said.

"I'll meet someone and they will say, 'Is the basketball court still on the third floor?' " Andrea said. 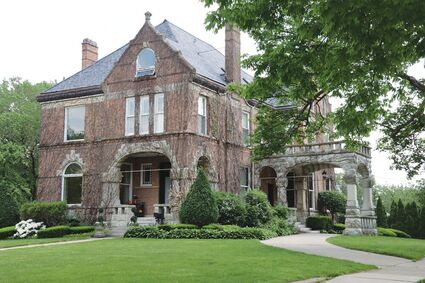 The Persicos have been saddened by the disappearance of historic homes in town, although Mike noted not every home should be preserved.

"You're always going to have some element of teardown, and I think that's healthy," he said. "It's kind of like pruning a tree."

He and Andrea hope their work on this home will inspire others.

"I think old homes can be restored and I think we are trying to provide a canvas," she said.

"A blueprint for what others can do," Mike chimed in, adding that he believes village incentives are critical in the preservation effort.

"I think more and more people will hopefully follow our lead and preserve these homes," he said. "Once they're gone - no one builds homes like this any more."

Other claim to fame: served as Alderman Marty Swayzak’s house in the 1990 film “Backdraft”