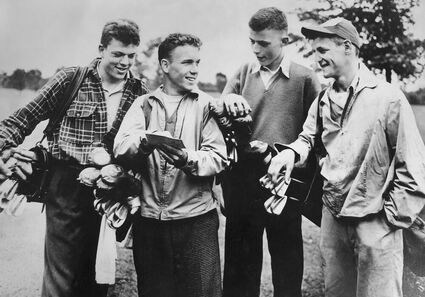 The Hinsdale Township High School boys golf team won its first state championship 75 years ago Tuesday, May 18. Team members included Ben "Connie" Creed (from left), team captain Henry Heinly, Sam Stout, all of Hinsdale, and Walter Poswilko of Westmont. The team won every dual meet, along with the district and conference meets on the way to state title, according to Poswilko's son, Thomas. Coach Russell Poppenhager led teams to two more state titles in 1954 and 1961. It would take more than a half century for the school to capture another golf state title (2012-13) - and then it would win seven in a row. (photo courtesy of Thomas Poswilko)