The Barclays near renovation's end, start journey in house in historic Robbins subdivision 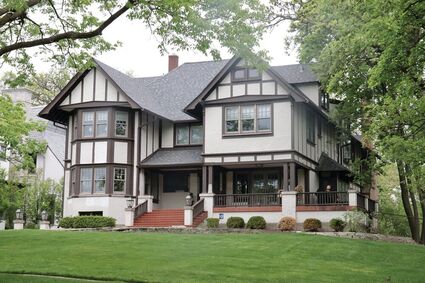 While parts of the historic home at 433 E. Third St. remain under construction. owner Sarah Barclay is enjoying its updated elements including a new kitchen and shelving. The dining room has retained its same footprint, but features fresh artwork, lighting and decor. (Jim Slonoff photos)

Sarah Barclay and her family moved into the circa turn-of-the-century home at 433 E. Third St. in September of 2019.

By this September, they hope their extensive renovation work will have become a memory and to be writing a new chapter in a house that has stood the test of time.

"This was a long process," Barclay said while standing on the handsome wraparound front porch that provides an elevated street view.

"When you're upstairs, you feel like you're in a tree house," she remarked.

A self-described preservationist and member of the village's historic preservation commission who grew up in a vintage home in Indianapolis, Barclay has been enthralled with both the glories and travails of the modernization process. Modernization from what is a bit of a mystery, however. Surprisingly, despite vast archives, the Hinsdale Historical Society's file for this property contains only a real estate transaction card from 1976, when the home was sold for $130,000. The line for its age reads "75," putting its construction around 1901. But other sources date it to 1908.

Even the style is enigmatic.

"This house borders on Tudor but into Craftsman," Barclay explained. "It has the huge overarching eaves, yet it has the exposed timber on the outside. It's trying to figure out what it wants to be."

The family had been living just the other side of County Line Road but needed bigger digs for their growing family of five. The Hickeys were selling their longtime residence and feared someone tearing it down.

Sarah knew the moment she first walked through the vestibule and into the foyer with its grand staircase that couldn't happen.

"These two doors and the leaded windows sold me," she said of the entryway.

The classic wainscoting ornamenting the staircase didn't hurt either.

Her husband, Jason, wasn't so sure, but the expansive backyard and his spouse's enthusiasm were enough to gain his consent.

At the closing, the adult Hickey children wrote notes to their younger Barclay counterparts, recounting joys from the past they would soon experience, like racing down the stairs on Christmas morning.

The original doorbell with its old-timey chime seemed fated for elimination when a coat closet was removed. Not so fast, said Barclay, insisting it be relocated, to her electrician's chagrin.

"There is no way I'm putting a Ring doorbell on my 100-year-old house. And I like the sound of it," she said.

The old kitchen was converted into an office area and mudroom. To make room for the dream kitchen, a central staircase was taken out and the powder room moved.

"So we just took out the middle of the house, basically," she said. "We added steel beams so we could take out the staircase."

During that process, the charming dining room with its large bay window and window seat became the operations center.

"They were able to re-route plumbing through the wall," Barclay explained. "I had a refrigerator, I had a sink, we had all of our food just on (open) shelves. We had a microwave and toaster that you couldn't use at the same time or you blew a fuse."

Upstairs the home's five bedrooms and four bathrooms are being either tweaked or reimagined. Barclay really wanted a second-floor laundry room, too. But that project would mean sacrificing Jason's vision of adding on a home office.

"Happy wife, happy life," she remarked with a smile.

Old cracked pipes meant the living room wall had to be ripped open to replace them. She took advantage of the torn up wall to install new wiring for sconces.

"It all adds up fast," Barclay said, echoing the mantra of many a homeowner during a renovation project.

Among the artifacts they've kicked up are pieces of original linoleum flooring and old drawings and plans. Thankfully, the second-floor wood floors were in lovely shape.

The Barclays went through the process to have the home placed on the National Register of Historic Places, a arduous process of documenting its features but rewarded with property tax relief.

A surfeit of old doors discovered in the basement are being reintroduced to the new layout, one at a time. 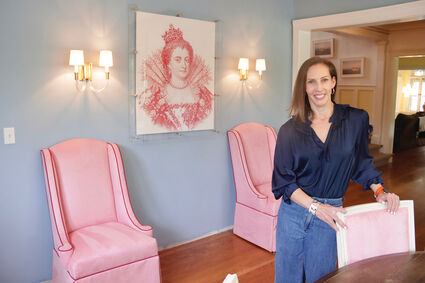 "My son just a got a door to his room. He hadn't had one in two months," Barclay said. "No new doors. They all have to be old."

More improvements lay ahead, eventually, like rebuilding the front porch, installing a new driveway and sprucing up the landscaping.

She acknowledged that constructing a brand new home would probably have been faster and less costly.

"But I wanted to add our story to the home. That was really important to me," Barclay commented.

She told of finding the Hickeys' hand-scratched height chart in a closet and cutting it out for them to have as a memento.

"It is a labor of love, she said. "We have just added to the timeline, and I love that part of it."