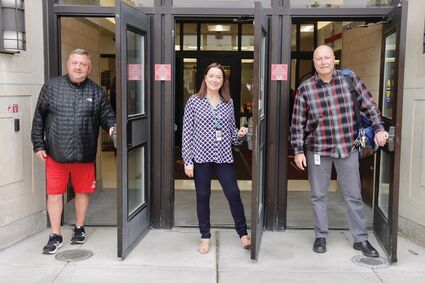 Julie Baker became a chemistry teacher at Central 21 years ago as a second career after working as a research assistant. But it was her work as a "lab rat" at the DuPage Children's Museum that revealed the rewards of education.

"I just really fell in love with watching children learn and watching their eyes light up," Baker said.

"It's just a blur," she said of her first year on staff. "Just working hard every day and every night to make sure that lessons were good."

Recognizing science is daunting for some students, Baker said she crafted her lessons as critical thinking exercises.

"What my goal always was to increase their skills in problem solving," she related.

A highlight each year was the hot air balloon challenge in the field house.

"Just hearing the cheers of everybody able to take that knowledge and build that balloon so that it reached the fieldhouse ceiling," she remarked.

Last month Baker was named an Outstanding Activity Sponsor by the Illinois Directors of Student Activities for her service with the Women In Engineering Club.

"I'm really, really proud of that and proud of those girls," she said of the 45-member strong group

The collegial, family-like science department was an abiding source of support, she said, and the students never let her grow bored.

"Those kids sitting in front of me each year are different every year, and that's exciting," she said. "That's what I'm going to miss the most."

Like Baker, Christine Billie made a professional shift into teaching 19 years ago, the last 16 of which she's spent at Central teaching English.

The loss of her job with a relocation company forced her to relocate - and reinvent - herself.

"I had always wanted to be a teacher, so I went back and got my certification," Billie related. "I've been extremely happy with my decision."

Teaching summer school at Hinsdale South opened the door for a permanent spot in the district. As a mom of teens educating teens, she brought a special understanding to the job.

"They're young adults on the precipice of becoming adults," she said. "Sometimes they think they know it all. Other times they admit they know nothing."

She relishes helping kids write honestly, and is gratified when her own writing, like a college recommendation letter, can provide a assist.

"One girl applied after taking a year off. She wrote me, 'I got in! I'm so excited and thank you so much.' " Billie recounted.

Having to become a morning person took sacrifice, but summers vacations have been a nice trade-off

Her normal graduation routine of standing by the tennis courts to high-five fresh graduates as they pass may be stymied by the pandemic. But she'll make sure to say her goodbyes.

lives of kids," she said.

Steve Gross remembers feeling like the rookie when he started as a social studies teacher at Central 34 years ago.

"My first year teaching I was the youngest in the department by 16 years," he recalled.

The old guard soon retired and he felt the pressure to measure up.

"That first couple years of teaching, you literally just have your head down trying to stay ahead of everybody," Gross said. "Especially at a place like Central, you better know what you're talking about."

Gross would even eavesdrop on experienced colleagues to glean class management tips, particularly on the art of storytelling.

He coached the varsity girls basketball team for 15 years, winning a state championship in 2002.

"That's when you start to realize that you know families," he said.

Another mark of his longevity is the file cabinet full of letter from students after they've moved on.

"Many of them make a point to touch base after they're gone," Gross remarked.

Aspiring educators should appreciate young people as much as their subject area, Gross advised.

"You've got to be able to adapt a lot," he said. "The relationships with the kids and just having fun in class is what I enjoy."

Pat Richards arrived at Hinsdale Central as a student teacher in 1986. And he never left.

"It was rewarding to have the ability to help so many kids with a lifelong skill," he said. "I tell kids their grade is going to be based on how much grayer my hair is after riding with them."

Coaching has also been a significant part of his Red Devil Nation tenure, having been the girls varsity track coach since 1990.

"I love kids and sports so much," Richards said, adding he intends to continue coaching post-retirement.

Coming from a family where most men became Chicago police officers, Richards saw teaching as a way to serve the community from a different lane.

Young people are eager to learn and improve themselves, he asserted, but it's not a one-size-fits-all proposition.

"Patience," he said when asked his biggest teaching takeaway. "You don't teach all kids the same way because all kids are different. They just want somebody who cares about them."

Like Gross, he's had second-generation family members in class.

"But I say, 'Don't believe any of the negative things your parents told you about me,' " he joked.