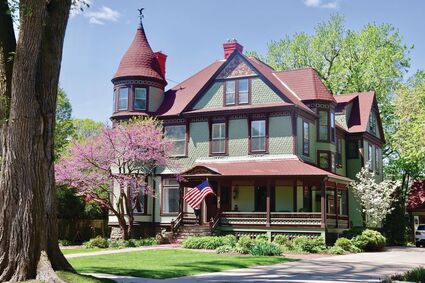 Amy Prame purchased the home at 318 S. Garfield St. with husband Thomas in 2015 after being enchanted by its vintage charm. "There was nothing wrong with it. It just needed a little TLC," Prame said of the ongoing effort to both preserve and modernize the former residence of prominent early Hinsdalean Robert Childs. "You just can't build a home like this today." (Jim Slonoff photos)

A painted lady can sure turn heads.

The Queen Anne-style residence at 318 S. Garfield St. has been getting second looks since 1888, when it was built for early Hinsdaleans Robert and Mary Childs, their five sons, Mary's mother and brother, and Robert's sister.

Presumably its six bedrooms were sufficient to accommodate the entire brood. More than 130 years later, it is home to the six-member Prame family.

"It's a big house," remarked Amy Prame of the three-story, 6,000-square-foot architectural gem that was placed on the National Register of Historic Places in 2000. "It works well for our family."

Prame and husband Thomas purchased it in 2015, having already rehabbed a couple of historic homes. They weren't exactly keen on taking on another project.

The family had been renting in the village for a few years when the house came on the market, compelling them to reconsider their resistance.

"You walk in and it's like, the character - we would never be able to build a house of this size in Hinsdale," Prame commented, noting it has six and a half bathrooms and four fireplaces.

There's nothing subtle about this Victorian-era beauty, with its cone capped turret that reaches nearly as high as the massive trees of the same vintage lining Garfield. Its red roof and distinctive fish scale shaker-clad exterior were hand-scraped by crews, Prame said.

"There was a lot of damaged wood that needed to be replaced. We had carpenters on site to replicate the damaged shakers," she explained.

Reclining lions flank the front steps, which lead onto an inviting wraparound porch. From here it's easy to imagine turn-of-the-century visitors paying a house call, being welcomed into the foyer with its fireplace and ushered into the adjacent parlor to await the host.

The original woodwork is striking, as are the exquisite stained glass windows placed throughout the home. Even the ornamental door knobs and hardware give a sense of the period's celebration of craftsmanship and artistry.

"That's why we like the old homes, all the detail," Prame remarked.

Across from the parlor is the living room with a circular bay window perfectly suited for the family's baby grand piano. The high ceilings only accentuate the interior's grandness, but that feature, combined with vintage windows, also make for drafty winter days, Prame acknowledged. The chill a few months ago actually caused some unwanted dining room dampness.

"We finished the wallpaper on Friday. The next Monday, that's when we had that really cold weather, and our (upstairs) tub pipe broke," Prame said, pointing out some water stains on the ceiling. "It's always something that's never done."

Childs, an attorney, always seemed to be doing something civic minded, according to archival records of the Hinsdale Historical Society. He was president of local school board from 1879-94, and helped incorporate the Hinsdale Library Association, the forerunner to the Hinsdale Public Library, with Mary as its first president. Such service indubitably helped him win a seat in U.S. House of Representative in 1892, where he served one term.

Childs was also a charter member of The Hinsdale Club, the place to be when it opened at Garfield and First streets in 1899, as chronicled by Hugh Dugan in his book "Village on the County Line."

"The meetings, dances, plays, lectures, bowling tournaments and other functions that (took) place there (ran) into the thousands, and many important decisions bearing upon village progress (were) formulated within its frame walls," Dugan wrote.

Childs died in 1915. But if he were alive for Prame to ask him one question, it might be about the purpose behind the spindled divider between the parlor and front staircase that swings open. She wonders if it had to do with in-home funerals.

"My husband I talk about this all the time," she said.

There have been a few significant alterations. The kitchen has been completely transformed, and a deteriorating greenhouse in the back was converted into a small living room and butler's pantry. An arched doorway was moved from one side of the kitchen to the other. 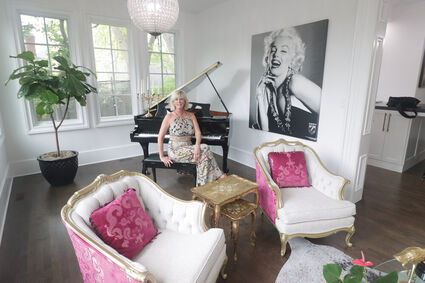 In the basement, the Prames found scraps of molding they could incorporate for some vintage flourishes in the renewed areas. Four of the bedrooms are on the second floor and two more on the third.

"We try to mix a little old with the new," Prame said.

"We've kind of been working our way down," she said of the renovation attack plan.

The project is not yet complete, but Prame said they don't let that keep them from enjoying a glass of wine on the porch and greeting neighbors.

"A lot the people that walk by thank us and say the house looks great. That makes you feel good," she said.

She admits that the feasibility of saving a historic home depends on the property - and the passion level.

"There are just some homes out there you can't save, but I'm all for (preservation)," she said. "It's a labor of love."