Hinsdale mom finds artful blessings in being a parent 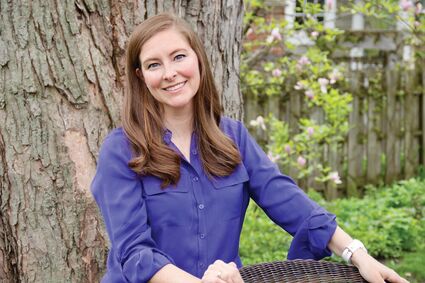 For Allison Peters, motherhood has been an evolution, with each stage having its joys and struggles.

"I don't know that it gets better. It gets different," remarked the mom of four, ages 11 to 5. "When they're newborns and they're just a ball sleeping on your chest, I love that. Then being able to laugh with your 11-year-old to Monty Python is pretty great, too."

Eventually they'll be fully baked, so to speak, as Peters invoked a bread analogy.

"You're putting all these ingredients into your child," she explained. "At some point, probably by the time they're halfway through high school, you realize that loaf is in the oven, and you hope that you've put in everything they need."

A key ingredient throughout Peters' own life has been music. She grew up singing in children's choirs and school productions, then went to Vanderbilt University to pursue opera singing, among other subjects. There she also found harmony with Nick, who would become her husband.

Musical theater in her younger days has given way to weekly vocal contributions at Grace Episcopal Church,

"It's like my own form of stress relief," she said.

As a member of Hinsdale Junior Woman's Club, Peters stepped into the role of fine arts chairwoman with a goal "to teach and delight" her peers through the Chicago area's array of creative venues.

"It's hard to find people who like to do same things that you like to do," she remarked, hoping to provide a new connection point for fellow members.

Peters recalled going out on a limb one year to purchase a block of 10 tickets to the Joffrey Ballet's production of "The Nutcracker." Turned out she picked a sturdy limb.

"By the end we had over 100 people who signed up for it," Peters remarked.

Other activities have included a private tour of the Art Institutes's modern wing, author talkbacks and painting workshops.

"People told me, 'I didn't think I liked arts. Now I'm all in,' " she said of the validating feedback.

Perhaps Peters' most notable conversion has been Nick, a former theater avoider she helped transform into a stage connoisseur.

Family movie nights during the pandemic have been a nice silver lining, as has the "human chain" challenge in which her kids lie head to toe down the staircase to chart their growth.

"Now they have reached of bottom of the stairs, which is a true triumph," Peters said.

She takes her job as nurturer seriously. "No matter how bad their day is at school, my kids know that when they come home, they're loved," Peters said.

New moms, she advised, should find ways to lean into their own passions.

"Don't lose who you are when you are on the motherhood journey," she said.

And find a community of supporters to nurture you.

"I would have been lost along the way without those people."