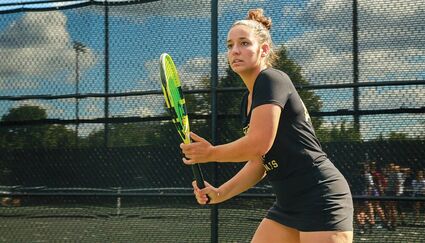 A number of Division I college athletes from Hinsdale are enjoying getting back to competition this spring after their 2020 seasons were canceled by the COVID-19 pandemic. Learn what the journey's been like for four of these former Hinsdale Central Red Devils through the disappointment and into a new year of opportunity.

Heading into the 2020 women's tennis season, then-sophomore Stephanie Dolehide and her Army teammates were eager to defend their 2019 Patriot League title. On March 12, that dream was dashed with the cancellation of all spring sports.

"It was heartbreaking," Dolehide said, noting the particular pain felt by the senior class. "It was difficult to grasp that collegiate tennis was over for our seniors and that we weren't able to fight with them till the end."

The team was able to reunite at West Point for summer training, but the 2021 spring season remained a question mark. They knew any resumption would be under the threat of potential shutdown due to positive tests.

"Returning to competition this season was filled with uncertainty yet also hope," she remarked. "Since we were fortunate enough to understand this uncertainty, we were able to focus on the aspects of our sport that we could control to ensure that we were ready when we were afforded the chance to compete."

Dolehide said her time in lockdown enabled her to focus more on personal fitness.

"This brought me to my healthiest lifestyle and has made me feel the best on and off court," she said.

The results speak for themselves as the junior recently earned Patriot League Women's Tennis Player of the Week honors for her exploits.

But the satisfaction runs deeper than individual accolades.

"This experience deepened my team's gratitude for collegiate sports. Each competition has been a blessing and has made us compete with more passion," Dolehide said. "I know that I will remember the time it afforded me and my teammates/company-mates to spend together."

University of Illinois golfer Brendan O'Reilly knew the team's prospects for a season weren't good as he heard reports of professional sports leagues shutting down.

"Everyone was bummed," said O'Reilly, class of 2021. "It was just really a curve ball thrown at us."

He returned to Hinsdale for a time, then headed south to work on his game as golf courses in Illinois remained closed. He tried to play it as it lies, to borrow a phrase.

"We basically were just taking the hand that we were dealt," O'Reilly remarked, saying the team stayed connected and worked individually to keep skills sharp. "I like to think our team has a pretty strong work ethic and culture. We never knew when our next match was going to happen, and we just wanted to be ready."

O'Reilly and the Illini played a few fall tournaments, raising their hopes that a full spring 2021 season would be a reality. To everyone's relief, it has been, without any COVID-related hiccups. Yet.

"We keep the pins in and don't rake the bunkers," he said of the special protocols during competition.

Minor stuff compared to the prodigious joy of playing again.

"It's just really awesome because it's what we all love to do, especially representing the school," O'Reilly said.

"Whenever something you love dearly and work at every day is taken away from you, that's tough," he added. "We're always going to compete as hard as we possibly can. It was taken away, and we're just happy to have it back."

"We were on spring break and (team members) were still in Milwaukee at a hotel, and we had early morning practice," she recounted.

Word circulated that East Coast leagues were shutting down, but the Golden Eagles next game in two days was still on. Until it wasn't.

"At the end of practice we got an email from the university that the school was closing," Mulvihill recounted.

Then their weightlifting session was canceled.

"So we had a meeting in our locker room and found out that the game was postponed," said the junior defender. "Within like 12 hours we went from having a game in two days to it being postponed to there being nothing. Immediately, our coach started crying, and all of our seniors were devastated."

Their fall return was marked with some positive tests for COVID, curtailing team activities.

"We saw what that could do," Mulvihill said of the consequences of not taking adequate precautions.

This spring they've taken a "deep dive" into a team-only bubble until May.

"We only see our teammates and have to socially distance even from our parents," she said.

The stringent measures are credited with a spotless string of negative tests. Scheduling has involved multiple-game weekends against the same opponent to reduce travel.

There's been no complaining.

"Our slogan for the season is 'Unfinished Business,' " Mulvihill remarked.

On Friday, the team will finally play its first game in front of fans. Mulvihill's excited to have her family in attendance.

"I've learned just to play every moment like it's your last," she said.

One year, to be exact.

"It feels great," Pisani said of her debut last month. "It feels like we've all come such a long way from last year."

The 800-meter specialist contributed to the program right away as a freshman, posting solid results in the indoor season.

"I got a lot of momentum going," she said. "I was supposed to come back that week (after spring break) for our first outdoor meet."

Her break was shattered with the news that wouldn't be happening.

"I remember being really sad and kind of confused about it - 'This is going to be my first year in a really long time that I won't have this,' " Pisani said.

Zoom meetings with her Gamecock community helped her stay on track physically and socially during remote learning. 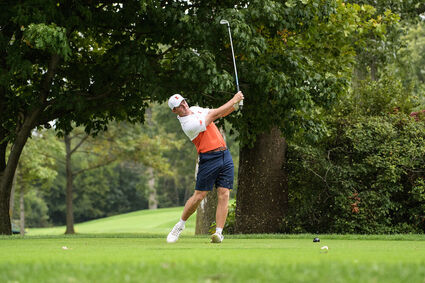 "It helped a lot in making things feel a bit more normal than if I wouldn't have had that structure," she said.

In the fall she ran with the school's cross country team, as she'd done at Hinsdale Central.

"It was great to get back into some races and compete," Pisani commented.

Masks and daily temperature checks are required as are weekly COVID-19 tests.

"We make sure we're cautious about how many people are around and who we're around," she said.

Pisani said complacency has not been a concern this season,

"Sometimes I could feel like I'm just going through the motions," she said. "Now that I've had a whole season taken away from me, I really want to cherish every meet."