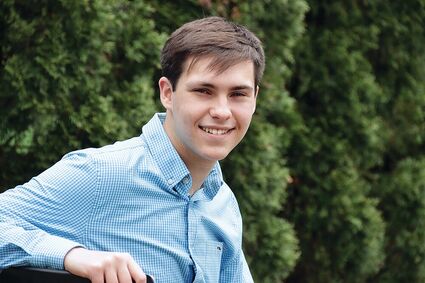 The musical "Annie" is a story of hope and the country's recovery from a dark time - a fitting theme for Nazareth Academy's 2021 spring musical, said Hinsdale resident and cast member Harrison Gianares.

After a canceled show in spring 2020 and a fall show compiled of individually recorded monologues, "Annie" takes a welcome step toward normal.

The first half of the show is a compilation of individual recordings, but by the time the cast got to the second act, safety measures had relaxed enough to allow actors to perform together. Gianares said it felt good to be back on stage with his castmates and friends.

Gianares plays President Franklin D. Roosevelt, who in this fictional story is visited at the White House by spunky orphan Annie and her wealthy friend, Oliver "Daddy" Warbucks. It is during that visit that Roosevelt, inspired by Annie's optimism, decides to draft the New Deal that will bring the country out of its despair.

The part of Roosevelt is portrayed using a wheelchair, so Gianares' role is short on choreography. His character is key, however, to the performance of the iconic song "Tomorrow."

Gianares said there's a shift in the show's tone after that song, from one of worry and despair to one of hope and possibility.

As production of Annie began, rehearsals were held online. Even the choreography was learned via Zoom. It wasn't ideal, Gianares said, but it was good to see his fellow performers, if only on a computer screen. With rehearsals behind them, cast members recorded their parts on their own for the first act. But when it was time to start recording Act 2, social distancing was relaxed enough to allow the actors to record together.

"Now, we were actually building a show," Gianares said.

He said he's proud of the performances that he and his castmates were able to put together while remaining apart.

"I was really amazed to see everybody come together and be able to do this," he said.

Since then he's taken every opportunity to act, sing and dance in his school productions. His favorite role to date is Gaston, the arrogant antagonist in "Beauty and the Beast." He said the part allowed him to play the villain while also getting a few laughs from the crowd.

The reaction of the audience is what Gianares said he loves most about being on stage. It's his hope that his junior year will include a return to the stage and a full auditorium. Until then, Gianares said he's grateful for the technology that has allowed NazDrama to perform virtually throughout the pandemic.

"Annie" is pre-recorded and will be presented to ticket holders this weekend. (See Page 34 for details.)