Those grieving invited by resident to step into healing 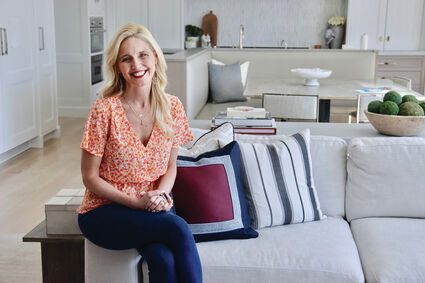 Several years ago Hinsdale's Christine Marzullo was at Robbins Park, taking pictures of her then-2-year-old son as he spun with delight as only a toddler can.

A close look at her shots revealed a stunning image.

"My dad's picture, that we had used with his funeral, was in the sun's rays," Marzullo related.

It was a sign, she believed, that the village should play host to an event helping people process their bereavement. Years later that vision has materialized as the Memory Mile from 11 a.m. to 1 p.m. Sunday at Robbins Park (see Page 32 for details).

"I wanted a way to bring everyone together in their grief and also inspire them to find a new relationship with the people who passed away," Marzullo said.

Participants pause at different "reflection stops" along the course with prompts like "birth" and "life." Marzullo encourages them to carry photos, posters or wear tribute clothing to represent their loved one.

"I wanted it to be uplifting but also like a journey," she said. "It's going to be a little bit emotional for some people to revisit these stages of people's lives."

The closing will be a release of balloons, which walkers will have collected along the way. A live artist also will be creating works of the event.

"I just think with spring and new life coming, it's just a good, inspiring time to do it," Marzullo commented.

Her father, Jim Cantalupo, was chairman and CEO of McDonald's Corp. at the time of his unexpected death April 19, 2004, at age 60. Devastated but eager to support others in mourning, she began working with hospitals and other organizations on ways to commiserate, calling her mission Together at Peace.

"With grief, it's such a sensitive topic," she said. "It doesn't really get easier. You just find new ways to feel closer to your loved ones that passed away."

"I feel like he's even stronger when his spirit is around me," she said.

But she acknowledged that many are reluctant to share too much of their grief with others.

"You feel like you can't talk about them or say their name after a certain time because it makes people uncomfortable," Marzullo said.

Restrictions on traditional memorial services due to the pandemic have been a double blow, and she hopes people's freedom to express their pain will be therapeutic.

"You can go walk a mile and think of whomever you've lost and just feel inspired and connected with nature," she said.

Marzullo initially wondered if anyone would show up. She's heartened that dozens have. The St. Isaac Jogues Church parishioner said it's also meaningful for her that the walk falls on Divine Mercy Sunday according to her faith tradition. All are welcome.

"It'll be different for everybody," she said.