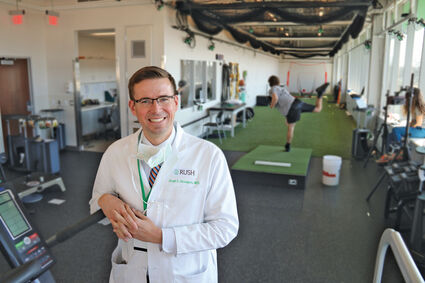 Dr. Grant Garrigues of Hinsdale, an orthopaedic surgeon specializing in shoulder and elbow surgery at Midwest Orthopaedics at Rush, said athletes should pay attention to pain and swelling and seek treatment early when an injection or physical therapy might solve the problem. If they ignore the problem, a more invasive solution might be necessary. (Jim Slonoff photo)

Last year was a year like no other - especially for the docs who take care of Chicago's professional athletes.

"It was kind of eerie - kind of like watching a men's softball league game," Dr. Chuck Bush-Joseph of Hinsdale, a surgeon at Midwest Orthopaedics at Rush and one of the team doctors for the Chicago White Sox, said of the team's games in empty stadiums.

This March looks much different. Spring training is in full swing, and the Sox home opener is set for April 8. But COVID-19 precautions are in place for the players and those who support the team.

"Everyone had appropriate PRC testing and antibody testing before they could even get into the parking lot," Bush-Joseph said.

Dr. Grant Garrigues of Hinsdale, who specializes in shoulder and elbow surgery, was recruited by Midwest Orthopaedics at Rush 2 1/2 years ago to work with Chicago teams and now is assigned to the White Sox and Chicago Bulls. He too spoke about the COVID-19 protocols in place to keep everyone safe.

"We have multiple COVID tests every time we are going to interact with a player. We have tests for days leading up to the time we're awith them," he said.

He's already spent two weeks at spring training in Arizona and said all employees there wear bracelets that register when they are within 6 feet of someone else.

"If someone does turn positive, they can very quickly figure out who may have been in contact with those people and isolate them," Garrigues said. "It's pretty impressive what they have done to try to keep everybody safe. The NBA has put in very similar protocols."

The players returned in good physical shape, Bush-Joseph said, but skills training was a struggle for some during the off-season. That meant more attention had to be paid to the speed at which athletes ramped up.

"That's a problem, but it's been a much bigger problem with our recreational athletes, our high school athletes," he said (see sidebar).

"These athletes, they're all in the top 1 percentile athletically," he said, noting that soccer players run about 7 miles every game, with lots of stops and start.

"Then there is match fitness, which is impossible to replicate without actually playing games," he added.

After four months of not playing last year, athletes gathered in Orlando for the MLS is Back tournament in July.

"Players were forced to ramp up their level of fitness and competition in an expedited manner," Forsythe said.

In recognition of that, FIFA decided to increase the allowed number of substitutions in a game from three to five and to schedule water breaks during competitions.

"The overall injury rates were similar, fortunately, because of the water breaks and the increased number of substitutions," he said.

The event was a success, due to daily testing and strict quarantining protocols, Forsythe said.

While the three surgeons also maintain a regular practice, they said they enjoy the time they spend with professional athletes.

"It is the locker room and the camaraderie and the excitement," Bush-Joseph said of the perks of serving as a team physician. "I would add that it's a lot of fun when they win. It's hard when they lose.

"2005 was one of the funnest years I've ever had," he continued. "It was three weeks of absolute joy as the Sox won the World Series."

"Players get injured more often. It becomes more of the August and September blues," he said.

The energy is back this year as the team has its sights set on returning to the World Series.

The doctors take care of all levels of players, from the rookie league to the majors. Bush-Jospeh said he enjoys watching players mature.

"It's almost like watching your kids grow up, going from St. Isaac's to Hinsdale Middle to Hinsdale Central. That's something I really enjoy," he remarked.

Garrigues said it's fun to know big-name athletes - and his kids get a kick out of it - but he really appreciates the opportunity to get to know them as people, meeting their families and watching them fight their way back from injuries.

Monitoring spring training for the Chicago White Sox in Glendale, Ariz., is one of the responsibilities of the Hinsdale surgeons and other medical professionals who work with the team. While many COVID-19 safety protocols are in place, including social distancing for fans, the 2021 season promises to be better than 2020. (photo courtesy of Grant Garrigues)

"You really share in that joy of the highs and lows of being professional athletes. It's very rewarding to be an insider in that world and sort of share in their victories," he said. "When they win a game, obviously I'm not out there pitching and I didn't take a single swing. You feel a real profound joy in the team's success because you feel like, 'I gave my all to keep these players healthy on the field.' "

Forsythe said his work has given him a new perspective on professional sports.

"You realize that sports and athletics is really the same fundamentally, whether it's the high school or college or professional level, and that those professional athletes have the same sort of challenges that the rest of us do," he said. "They are human, and just as we have all had to cope and struggle with COVID over the past year, it has been the same challenge for them."

Returning to athletics this season will present some unique challenges for athletes, according to three surgeons from Midwest Orthopaedics at Rush who also serve as team physicians for Chicago’s baseball, basketball and soccer teams.

“We’re seeing a lot of these overuse achy shoulders and elbows in our high school and junior high athletes who were not throwing,” said Dr. Chuck Bush-Joseph, who has been team doc for the White Sox since 2003.

“A lot of high school kids want to get up on the mound and throw as hard as they can for 30 or 40 throws,” he said.

Pitchers typically start training with short throws and move to on-the-mound pitching over the course of six weeks, he said.

“Most people are trying to do it in two, three at most,” he said.

Kids are very flexible and able to whip the ball with their arm, he said, rather than throwing with their whole body and relying on the strength in their core and legs. This causes strain to the shoulder and elbow and can create rotator cuff or growth plate inflammation. Bush-Joseph said it’s important for athletes to listen to their bodies.

“Luckily the families and parents and coaches know they don’t make kids throw through pain any more,” he said.

Aches and pains means it’s time to ease up on throwing, he advised.

“Go from long toss to short, work on conditioning, core exercises to make sure the whole body is ready to throw,” he said.

Dr. Brian Forsythe, who works with the Chicago Fire, the Chicago Bulls and the White Sox, agrees about the importance of conditioning.

“Most injuries happen at increasing rates when athletes fatigue,” Forsythe said. “We know that if you’re playing in a soccer game, after the 60th or 70th minute, you are more likely to get injured. You lose some of that protective muscle strength with fatigue. The longer you play, the more likely you are to get hurt.

“If you are coming off of nine months of inactivity because of COVID, your conditioning level is probably not what it normally is,” he added.

Forsythe recommended putting added emphasis on aerobic training and weight training and to practice jumping, twisting and a plyometric progression.

Dr. Grant Garrigues, team doc for the White Sox, said those who have had COVID-19 might want to take some extra precautions.

“There is some data that COVID may cause some longterm myocardial issues in certain patients,” he said. “If someone has actually suffered from COVID, I would recommend they consult with their primary care physician prior to returning to sports.”

Despite the excitement created by warmer weather and promising news on the pandemic front, people need to take it slow even as they get out and enjoy the nice weather. Garrigues noted that athletes who miss time during the season because of an injury are at a higher risk of a different injury when they return to play.