Coach thrilled to be back on the job 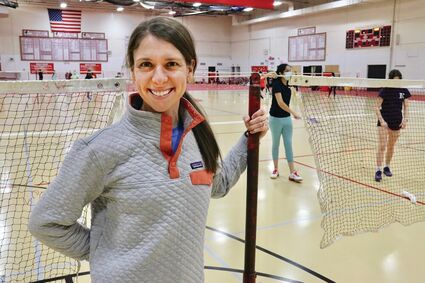 Hinsdale Central coach Katie Maley has an extensive background in sports, playing badminton, basketball and tennis at LT and studying dance from fifth grade through college. She also played basketball and volleyball at St. Cletus School in La Grange, where she grew up. (Jim Slonoff photo)

With years of playing sports under her belt and a degree in communications, a young Katie Maley planned to go into sports broadcasting.

As a senior at DePauw University, she secured an internship at Comcast Sports Net. She loved meeting the athletes and logging play-by-plays. She did not enjoy working 3 to midnight every Friday and Saturday night.

"I kind of realized getting into sports (broadcasting) was not what I thought it was going to be," she said.

With a double major in Spanish, she headed back to school to earn her master's in teaching of foreign language. Her first teaching job also opened the door for her to become a coach.

"Once I had my master's, my first job was a year-long maternity leave for a Spanish teacher at Hinsdale Central, which is how I got involved in coaching there," she said. "One of the other Spanish teachers was the varsity poms coach and she had been doing it for 10 years at that time."

The two became friends, and Maley shared her background in dance.

"She pretty much immediately asked me to start coaching," Maley recalled.

She took over as varsity poms coach in 2009 and began coaching badminton at that time as well.

"There were no clubs. It was not an option to play year-round, and it was a sport that I loved," she said. "That was the only sport I played all four years at LT. I have loved seeing it become a super-popular, important and really, really competitive sport in our area."

Another love of hers - dance - also has changed dramatically since she was a young athlete. The Central girls on the varsity pom squad have impressive technical abilities, she said.

"I always tell them, 'Guys, I would not make my own team.' They are really skilled dancers at a really high technical level," she said. "It's awesome to see their creativity and their grace."

Maley herself has evolved since she coached her first badminton team.

"I think I have definitely grown as a coach over the years," she said. "I've always been a strong proponent of the fitness level and the mental toughness level. That is one thing I feel like I always had as a player - keeping your head in the game, not getting flustered, staying focused. Especially for badminton, mental toughness is 75 percent of the game."

Becoming a parent to three children - Jimmy, 4, Meg, 3, and Andy, 1 - has helped her better appreciate the impact a coach can have on a student-athlete, Maley said.

"I always loved my coaches in high school and I always respected them and listened to them, but now as a parent, you understand your actions and your words, kids remember those," she said.

Badminton continues to suffer from the perception that it's just a backyard sport, Maley said, and she relishes in opportunities to show people just how wrong that is.

One of her favorite events each year is an open gym fundraiser, "So You Think You Can Play Badminton?"

"There is nothing that I love more than the boys coming in claiming they are the gym class heroes and they are No. 1 in badminton in class - and then they get absolutely smoked by my players," she said. "That is always really fun."

Maley, who describes herself as "super-competitive," enjoys schooling her husband on the court as well.

"Badminton is the only sport I've ever beaten my husband, Jim, in - and I won't let him forget it," she said.

Her team has been highly competitive as well, placing fifth in state four times from 2014-19. Last year, when Maley was on maternity leave, the season was canceled due to the coronavirus pandemic.

"It broke my heart for those girls who were seniors who I had on my team," she said.

Although Maley said she was a little nervous at first to come back to school this year, she feels very safe at Central.

Serge Penksik, the JV badminton coach, describes Maley as a knowledgeable, funny coach who makes the sport enjoyable for athletes.

"She's very, very good with the kids," he said. "She makes it fun for the kids. She has this really upbeat personality.

"We make a good team. I am a little bit more of a stickler on technique, and she keeps the kids motivated and makes it fun for them."

Cindy Tang, a 2019 Central graduate who came in sixth at state her senior year, credits Maley for teaching her not to sweat the small stuff. She also appreciated her coach's mix of honesty and optimism.

"She wasn't afraid to tell you where you needed to improve. Despite telling you what you needed to do, she always maintained an energy that kept you motivated instead of feeling down," said Tang, who had been playing for the University of Illinois Chicago before the pandemic hit. 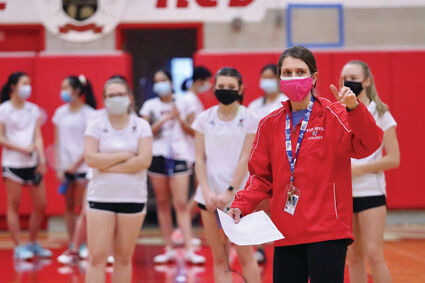 The pandemic's affect on the winter high school season has created some chaos at home, as Maley's husband is the head coach of the boys basketball team at Conant High School in Hoffman Estates.

"Our schedules are insane right now," she said. "We typically don't see each other Tuesdays, Wednesdays, Fridays and Saturdays. It has been a little rough for us. The end is in sight."

She said she appreciates everyone's flexibility - and the chance to have a season at all.

"I'm just so happy that these kids are able to play."