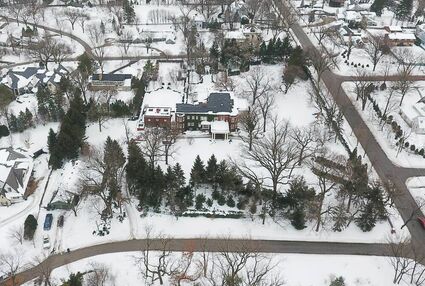 A drone view of 505 S. County Line Road shows the four-lot property that is the subject of a zoning board of appeals public hearing next month. The home's drive has access to both County Line Road (seen here) and Woodside Avenue. Under a plan to subdivide the property, the Woodside access would be eliminated. (drone photo courtesy of Yannis Arvanitis)

The proposed rezoning of a prominent residential property could mean the eventual redevelopment of the sprawling site, a vestige from Hinsdale's early days, but also possibly aid in its preservation.

In a pre-hearing discussion at Hinsdale's zoning board of appeals Feb. 17 via Zoom, board members were presented with variance requests for 505 S. County Line Road as part of the estate planning for the four-parcel site. The property is bordered by Woodside Avenue on the north and East Sixth Street on the south.

Robert O'Donnell, trustee for the Frederick Krehbiel Trust that owns the property, said the request for rear-yard setback relief is to allow subdivision of the contiguous lots.

"The home will remain on lots seven and eight," O'Donnell said, indicating the middle two lots. "(Outer) lots six and nine will ultimately, and hopefully, create two separate buildable lots within the village."

The Krehbiel home will need to have its driveway connect to County Line Road instead of Woodside, making its current side yard a rear yard. Two variances will be needed for the garage to sit 21 feet from the rear property instead of the requisite 50 and for the patio to encroach eight feet too far into the required 10-foot buffer.

The same family also owns the adjacent property at 526 Woodside, and there is a set of steps crossing the property line between the two. O'Donnell suggested that removal of the steps be included in the village's variance approval.

The home at 505 County Line Road dates back to the turn of the 20th century, when it was built by Lemuel Freer. According to historical records, Freer, son of wealthy pioneer real estate dealer L.C. Paine Freer, ventured out from Chicago to Colorado as a young man to try his hand at ranching. He later returned to the area to follow in his father's professional footsteps.

In "Village on the County Line," Hugh Dugan chronicles Freer's Hinsdale investment, which at that time extended all the way east to what is now the Tri-State Tollway.

"In 1897 he bought an expansive tract of land on the east side of County Line Road and built a spacious brick house near the intersection of Sixth Street," Dugan writes. "To the original tract additions were made, and Mr. Freer spent much of his time in the landscaping and improvements of these properties."

He and wife Mary had four children. Mary was a co-founder of the Infant Welfare Society of Chicago and also headed the knitting department of the Hinsdale branch of the Chicago chapter of the American Red Cross during World War I.

A photo in the Hinsdale Historical Society's archives reveals that the home originally featured a third floor with a ballroom and boxing ring. The top story was removed in 1934.

O'Donnell told ZBA members that the Krehbiel family is in the process of obtaining landmark status for the home, which was designed by noted architect David Adler.

Board member Gary Moberly asked if the two outer lots were buildable, to which O'Donnell replied that they will be legal nonconforming parcels.

ZBA Chairman Bob Niemann said the board, in its consideration of the application, should not grant the variances as a special privilege.

"Given that this is admittedly being done for estate planning purposes so they can sell off the other two lots and make more money, I think it's important for us to ...address that part of the special privilege criteria," he said.

O'Donnell said he will cover that at the public hearing. 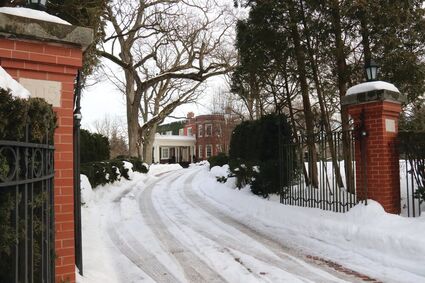 "It makes it more economically feasible if lots six and nine aren't also necessary in order to keep (the historic) structure," he said. "Part of the purpose is not only to create more profit from lots six and nine, but it's also to make more feasible the ability to maintain the historical structure on lots seven and eight."

A public hearing on the variance requests will be held at the ZBA's meeting at 6:30 p.m. Wednesday, March 17.