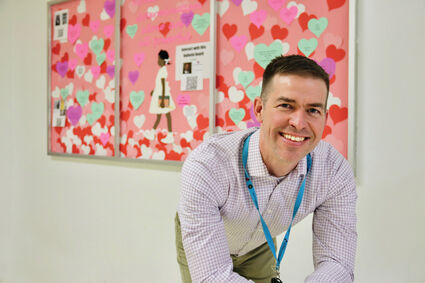 Hinsdale Central English department chair David Lange manages the school's Black History Month interactive bulletin board, which he said promotes positive, engaging learning about and response to influential Black leaders impact and "the importance of what they can do themselves." (Jim Slonoff photo)

What is the Black History Month bulletin board?

High schoolers are used to learning facts. But when Hinsdale Central teacher David Lange was approached about creating a bulletin board at the school with information of notable Black figures to celebrate Black History Month, he saw an opportunity for deeper student engagement.

"I liked the idea, but I wanted to make sure that it was more than just the traditional fact sheets," said Lange, chairman of the English department and 24-year faculty member.

He consulted with his social studies colleagues as well as the Students Organized for Anti-Racism (S.O.A.R.) group to develop a way to draw teens into a greater exploration of people such as the late Congressman and civil rights luminary John Lewis and school desegregation icon Ruby Bridges.

"The idea grew from just 'Here's some facts and stuff' to something more interactive," he said.

Lange posts portraits on bulletin board in the school hallway along with a QR code that students can scan. It links them to an online document with additional details about the person's life and lasting legacy.

"These are important Black Americans whose story we may know, but we don't know the backstory of," he said. "It provides a little bit more context that goes beyond the basic history and recognizes their unique contributions during the struggle (for civil rights)."

Students are then invited to respond with posts of what the readings stirred in them.

"It's a way to talk and engage in conversations about things that are challenging," Lange said. "When you read this stuff, where are you at with it right now? Tell me more about how you're responding to this.

"With each of the documents, we're trying to focus on something positive and on the importance of youth activism," he added.

Nearly 100 students have responded with comments, including these three.

• "I think that learning more about these brave people will inspire me to stand up for what is right in my community, just like they did."

• "(Lewis) was a civil rights hero, but he was also, at one point, a young person continuing to stand up for what he believed in."

• "The fact that John Lewis was arrested 40 times while nonviolently protesting shows matchless determination... This goes to show that anyone can make change, if they are willing to put in the work and make sacrifices."

Lange said the statements have touched him.

"I've been humbled and impressed and blown away by the responses from kids," he related.

As a teacher, Lange said he has tried to expose his students to a diversity of perspectives.

"I've always wanted to increase the range of voices in the stuff that we read," he said.

Lange hopes this effort will send the message that Black History Month is not just an observance for one subset of the community. It's for everyone.

"It's a way of validating that kids can and should feel and think and respond," he said. "The more voices we hear, the better."