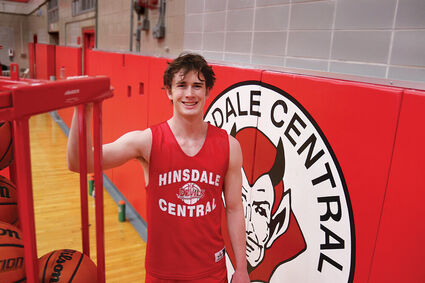 When did you first start playing basketball?

The first time I ever played on an actual organized team was second grade. I played with two other seniors on the team, Charlie Sessa and Charlie Herbst.

Obviously, I love the sport. On top of that, just the friendships you make through it.

When is the last time you played?

The last time I played in an actual game before the whole pandemic was the playoffs last year, when we lost. After that, everything kind of shut down.

It was a tough month. For a while there, everything seemed to be trending in the wrong direction. All of the sudden, there was a change and there's a ton of energy around the program. It's just super exciting to have a season and be back with the guys. That's the most fun part of all.

Do you prefer playing offense or defense?

Obviously, the offensive side of it is where all the fun is at, but defense is what wins us games, and that's what it's all about, really.

If you had asked me a week ago, my goal would be to hopefully play games. Now I want to win conference. The goal is always to be the No. 1 team.

What example do you try to set for younger players?

I like to try to set an example of consistency. I think it's important every day to bring the same type of energy, the same type of work ethic to practice. You can't ever take a practice off, especially this year with such little time.

I'm going to play at Tufts University next year. I'm going to study economics and I'm deciding between going for a minor in either psychology or computer science.

Why does coach Nick Latorre like having Cain on the squad?

I enjoy having Quinn on our team because he epitomizes what I would like our program to represent. He works exceptionally hard on the court and in the classroom. He displays tremendous leadership and selflessly serves his teammates. He is respectful and kind, plays with toughness and grit, and is a wonderful role model for all of our younger players.