Sports emerge from the deep freeze 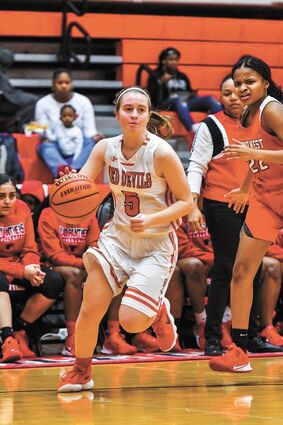 Hinsdale Central's Sarah Cernugel handles the ball during a game last season. Girls basketball is one of several Red Devil teams back in action after COVID-19 delayed the start of their winter seasons.

High school winter sports have emerged from their COVID-19 hibernation.

Yesterday's boys varsity bowling match between Hinsdale Central and LT was the first Red Devil competition since early November, with other programs scheduled to start in the days and weeks ahead. Central athletic director Dan Jones said the return to play is a source of joy.

"I'm really excited for our athletes and our coaches for them to get a chance to have a season and compete," he said on Tuesday.

In addition to boys and girls bowling, the badminton, girls gymnastics, boys swimming and boys and girls basketball programs are all readying for an abbreviated winter season. The Illinois High School Association announced the start of winter play Jan. 27, with the season ending March 13 with no state tournaments, as was also the case in the fall.

"The overwhelming feedback we have heard from athletic directors and coaches was that returning to play in all sports should be the main goal," IHSA Executive Director Craig Anderson said of the board's decision in a press release.

As part of the decision, swimming meets can resume holding relay events, and track and field teams may use shared equipment, like batons, when they start up activity in April.

Jones said the IHSA move set in motion of scramble of activity to schedule contests and juggle space needs and availability.

"I'm overwhelmed trying to dot all the I's and cross the T's," he related. "It's good to be busy again. I think we're in a pretty good place right now schedule-wise and practice-wise for our athletes."

Basketball is the only winter sport designated "higher risk" by the Illinois Department of Public Health that will be competing. DuPage County's move yesterday into Phase 4 COVID restrictions clears the way for games to be held.

"We are excited for the opportunity to be back in the gym playing basketball. The girls have been resilient through all of this, and I am happy for them to have this season, especially for the seniors," she said.

Jones said the games were scheduled starting Feb. 12 in anticipation of the ease in restrictions. Teams are limited to playing within their geographical area, but Jones expects that to change, too.

"We're anticipating that after the first three weeks in February, we'll be able to compete outside

of our region," he said.

Unfortunately, competitions will be closed to fans because the number of players, coaches and other officials generally maximize the number of people allowed in the gym under state protocols.

"As of right now, there are no spectators. The main reason is the availability of people in our gym is going to be used up by our athletes and visiting athletes," Jones said.

Persinger expects her team members to be highly motivated regardless.

"I have seen genuine excitement and most of all relief on their faces. The energy in the gym is amazing and it has been such a joy for the coaches to get to see the girls every day again and for the players to have time to be together," she said.

The truncated winter season means schools also need to plan for those "spring" sports that were deferred from the fall, namely football, girls volleyball and boys soccer. The traditional lineup of spring sports consequently have had their start dates pushed back later in the season than normal. Anderson said a priority in the IHSA plan was to ensure those sports play after being completely canceled last year.

"Ultimately, the board adhered to its stated goals throughout the pandemic: providing an opportunity for every IHSA student-athlete to compete safely this year and maximizing opportunities for traditional IHSA spring sports after they lost their entire season a year ago," he said.

The hope, he suggested, is to bring some normalcy back to students' lives.

"We are excited to channel our energy into creating as many positive experiences for Illinois high school students as we can between now and the end of this extraordinary school year," he said.

Boys soccer is poised to start practices on March 1, football on March 3 and girls volleyball March 8. Jones said he hopes to provide time for members of the programs to do weight training and contact drills. A pandemic has a way of spoiling plans, of course, but he said the school is working with the information and guidance available to run its athletics program safely and without more disruption.

"Every two weeks things change," he said, noting there are contingency plans if needed. "We're trying to get ahead of things."

Persinger said the team wants to make the most of the opportunity.

"We want to get better at our game every day and to enjoy the camaraderie and teamwork of being together again. We want to stay safe and healthy and have six awesome weeks of basketball," she remarked.