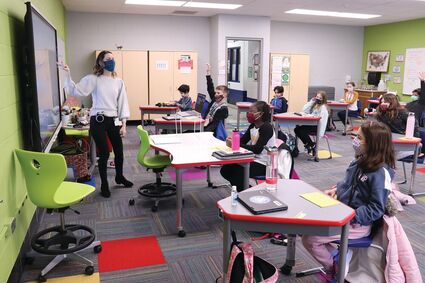 The two made a presentation to the Illinois Association of School Boards on Thursday explaining how they have implemented on-site COVID-19 testing to keep schools open.

The districts are offering rapid antigen (nasal swab) tests, rapid antibody (fingerstick) and saliva tests to staff, students and community members. To be able to do so, both districts had to complete many steps, including applying to the Illinois State Board of Education for a waiver to administer the tests without being a Clinical Laboratory Improvement Amendment-certified lab.

"Essentially what it comes down to is it is a matter of will and skill," Gower Superintendent Victor Simon stated in the webinar. "You have to have the people in place to do it. There are a bunch of t's to cross and i's to dot to get the rest of the way over the hurdles."

The necessary Center for Disease Control training and waiver application are an investment of time, not money, he stressed.

Butler Superintendent Paul O'Malley, whose schools opened full-time in mid-September and welcomed back significantly more students in October, told The Hinsdalean the tests have helped individuals feel safe in the buildings.

"The testing itself has given people the comfort level that they need, more specifically the teachers, and they feel real confident in what we do," he said.

Butler and Gower both have two buildings to serve their enrollments of 500 and 900, respectively, and are able to maintain social distancing of at six feet or close to it.

"We have six feet wherever we can. It is mostly six feet," Simon said.

The districts also have installed MERV-13 rated filters and relied on other measures, such as commercial-grade air purifiers. All of this comes with a cost, the two superintendents acknowledged.

"You invest in what you believe in," O'Malley said. "If you believe that it's important for kids to be in school, then monies, like a pendulum, they are going to swing."

Neither district has had to close its schools. One grade level at Gower Middle School did switch to full remote for two weeks at one point, Simon said. He stressed that families can choose to go remote at any time for any length of time if necessary.

"They can do an adaptive pause on their own," he said.

O'Malley and Simon, who each worked with the ISBE on transition plans last year, noted the organization's emphasis on in-person learning. Its benefits were evident, O'Malley said, when he saw students back in the building.

"Even though it was very trying times, very scary times, it was awesome to see the kids in the school with the teachers, and that's really where they belong," he said.

The two said they would be happy to work with other districts who are interested in implementing testing to bring back more - or all - their students.

"We're here to support," O'Malley said. "Anything we can do to help people out, we'll be more than happy to assist. If it's to bend our ears in frustration, we're here, too."

Simon said the program can be scaled for larger districts and stressed progress over perfection.

Community Consolidated District 180 in Willowbrook and Burr Ridge opened its doors for full-time in-person learning on Tuesday, with a slightly shortened day. The fact that 50 percent of students have chosen a fully remote schedule makes it possible, Superintendent Tom Schneider said.

The district started the school year with a similar schedule, then went fully remote from mid-November until this week.

"We hope this is it," Schneider said of possible schedule changes. "I think we'll be in this for the rest of the year."

In Pleasantdale District 107, school board members were slated to discuss Wednesday whether to bring students, who now have an extended half-day five days a week, back full time.

"We're currently having conversations about going to full days of instruction with all students starting the third trimester, which is March 1 for us," Superintendent Dave Palzet said.

Board members in Community Consolidated District 181 said last week they too would like to see schools open full-time for in-person learning on March 1. Superintendent Hector Garcia told The Hinsdalean this week that that would have been impossible at the start of the school year.

"Due to our size and limited space, we were not able to achieve 6 feet of social distancing and offer full in-person learning without hiring an inordinate number of staff members and securing a new building in August," he stated in an email.

He pointed to differences between some hybrid models and the one D181 is using.

"Students receive live instruction every day, differentiation and other synchronous services," he said. "We have also seen our daily engagement in terms of attendance remain consistent with last year's average of 95 percent."

At their meeting Monday, board members are expected to discuss implementing a saliva screening test for students, which would be one more step on the path toward reopening. The ability for teachers to receive vaccinations also will factor into the decision on reopening.