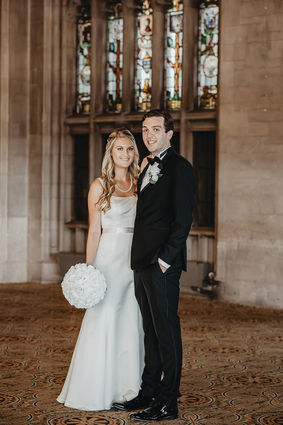 Elizabeth “Libby” Scott Melvin and James Sterling MacVicar were married the weekend of July 25, 2020, at Christ Church of Oak Brook and Cathedral Hall at The University Club of Chicago.

Libby is the daughter of Elizabeth Whitsell and David Lloyd Melvin of Hinsdale.

The groom is the son of Cheryl Nozicka of Battle Creek, Mich., and of Neil MacVicar of Holt, Mich.

The reception and dinner party were held in Cathedral Hall at the University Club of Chicago.

The bride is a 2012 graduate of Hinsdale Central High School. She earned a bachelor’s in communications with honors from University of Illinois in 2016. She is a country manager with the network management team at The Northern Trust Corp. in Chicago, serving as the bank’s liaison to Central and South American correspondent banks.

The groom is a 2008 graduate of Lansing Christian School. He earned a bachelor’s in physics with a minor in computer science from Michigan State University in 2012. He is a security architect specialist at Accenture in the firm’s identity and access management organization.

The couple enjoyed a mini-moon in Anna Maria Island and is living in Lincoln Park.