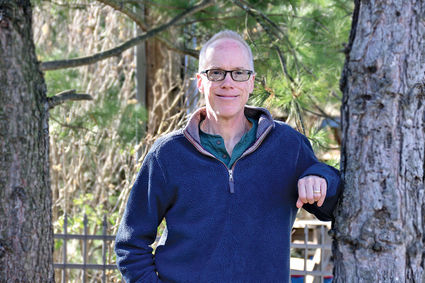 "The best beloved of all things in my sight is Justice."

These are the words of Bahá'u'lláh, the 19th-century founder of the Bahá'í Faith, which emphasizes the value of all religions and the oneness of humanity. It's a belief system that Hinsdale's Gordon Coates found compelling as a young man and which he now supports professionally as a correspondence coordinator for the Baha'i National Center in Evanston.

"We assist Bahá'í communities through the United States in applying Bahá'i laws - and also (helping) communities that are having difficult situations to deal with," he explained.

With no clergy, Bahá'i households instead establish local councils and gather monthly for a Nineteen Day Feast consisting of devotional, administrative and social elements. With a small number of adherents in Hinsdale, Coates said his family joins with believers in neighboring towns for times of fellowship.

The Hinsdale-raised Coates was introduced to Bahá'i by his college cross country coach. He was attracted to the call to root out prejudices and systemic inequalities to unite people across ethnic backgrounds, social classes and religions.

"The idea (is) that the founders of all the great religions were sent by God ... to guide mankind and not to compete with each other," he explained.

Coates was also drawn to Bahá'i's progressive advocacy for gender equality and the harmony of science and religion. He went to work for the Bahá'i organization, spending 2 1/2 years at the Baha'i World Center in Haifa, Israel.

"At the time there were 700 Bahá'is serving from all over the world," he said of the experience.

There he also gained a new appreciation for healthy eating and, after returning to the States, earned a bachelor's degree in nutrition and medical dietetics.

"I worked as a registered dietitian for 13 years at a hospital and a cancer care center," Coates related. "I would say my current specialties are oatmeal bread and big vegetarian salads."

His wife, Philippa, graduated from Hinsdale Central a few years after him. But they weren't acquainted until well into adulthood when his mom and her dad, serving together as election judges one year, learned each had an unmarried child - and that both were Bahá'i!

"Our parents aren't Bahá'is, so it's kind of funny," Coates said.

The matchmaking worked, of course, and the couple returned to Hinsdale in 2005 to make their home. They adopted a boy and later a girl, both from Guatemala and now in their teens. Coates began his work at the Bahá'i National Center, about a mile from the landmark Bahá'i House of Worship in Wilmette.

"My hope is that the struggles we've all been going through will help us focus more on spiritual things and on working together to attain a more just and unified society," he said.