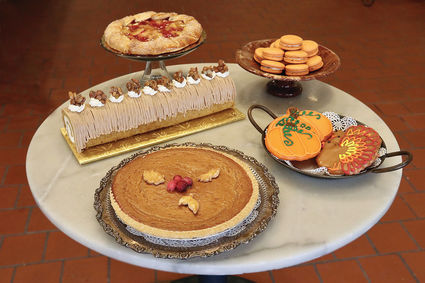 The fresh Rosebud turkeys available for order at Prime 'N' Tender in Hinsdale aren't the only items people want on their Thanksgiving table. The bone-in hams are quite popular, too.

"Not everybody is a big fan of turkey, manager Christine Taylor said, noting the spiral-cut ham is from a smokehouse in Chicago.

For those who do enjoy the feast's traditional centerpiece, whole turkeys are available in four sizes ranging from 12 to 28 pounds.

"The 8-12 weren't available because of everybody doing smaller family gatherings," Taylor explained.

A bone-in turkey breast also is available, a great choice for those with smaller crowds who want to spend less time roasting and carving.

And when it comes to sides, well, homemade stuffing is Taylor's favorite on the menu. It's also a family favorite of Jackie Qualtier, wife of owner Danny Qualtier.

"It's Jackie's mom's recipe and it's excellent," Taylor said. "It's got chopped carrots, chopped celery, chopped onions, some herbs. It's got some chicken stock in there and we also add some cream of rice soup and cream of celery soup, so it stays really moist when you cook it."

Customers also enjoy the mashed potato casserole and the homemade turkey gravy, which is great to serve on the holiday or later with left-overs (see Page 18 for more information).

The dishes that accompany the turkey can be time-consuming to prepare, Taylor noted.

"That's why we've started doing so many more of the side items, so all you have to do is pop it in the oven and warm it up," she said.

Like Taylor, Vistro owner Paul Virant of Hinsdale enjoys a good stuffing - or dressing, if it is cooked outside the bird - on his Thanksgiving table. He likes to make it with onions, celery, parsley, day-old bread (baguette, Italian loaf or other "lean" bread), broth, eggs and bacon, with dark meat from the turkey folded in. And don't be shy with the butter, he advised.

Virant's dressing isn't available on Vistro's Thanksgiving menu ("Maybe it should be," he said), but there are plenty of other delicious options.

"I love them all," he said. "I love pumpkin pie. Smashed potatoes I love. We always do Brussels sprouts and I love all those things."

He recommended home cooks brine the turkey before putting it in the oven to prevent it from drying out.

With such bounty, it can tough to save room for dessert. But there's a good reason to do so. Toni Patisserie & Cafe in downtown Hinsdale is baking up many of the standards - and some delicious riffs. 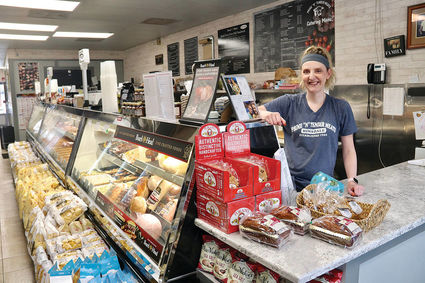 Manager Christine Taylor of Prime 'N' Tender in Hinsdale said the Thanksgiving side dishes that can be ordered - in addition to a fresh Rosebud turkey - will make meal preparation significantly easier come Nov. 26.

"One of the favorites is our pumpkin marscapone roulade," owner Toni Cox said. "It's a very light pumpkin cake that's rolled with a marscapone filling and has a cinnamon glaze. It's something that's pretty unique that you can't get anyplace."

The Praline Success - a hazelnut meringue filled with a hazelnut praline cream filling - is a delicious change of pace from a pecan pie.

"It's crunchy, but then you have the creaminess of the filling as contrast. A little bit of a twist for Thanksgiving, but something that still has the seasonal feel to it."

The bakery also offers cookies, several flavors of pies and tarts and a rum raisin bread pudding sold with a bourbon sauce.

With smaller gatherings and many folks canceling trips, Taylor said this is the year to make Thanksgiving dinner easy and delicious.

"You can't go anywhere, so you might as well have a good meal at home," she said.

Many holiday tables will be missing some — or all — of the family members who typically gather there.

While Thanksgiving 2020 certainly will be different, it still can be delicious. And it can be easy on the cook, too. Just reach out to one of these local establishments for help with sides, desserts and even entrées.

All orders must be placed by Friday Nov. 20, unless otherwise indicated.

Party trays with shrimp, shrimp and claws, hot and cold smoked salmon, poached salmon or custom arrangements are on sale for Thanksgiving.

Ho-Ka turkeys are available to order from the meat department, with sliced turkey off the bone available from the deli. Not a fan of turkey? Try the traditional meat or spinach lasagna.

Pick up some rolls (fresh or frozen take-and-back), cheesy rolls or focaccia for dinner.

A full menu is available online.

Pick up cranberry orange relish ready to serve along with cut-up butternut squash and rutabaga, diced celery and onion and peeled potatoes to make dinner prep a snap. Fruit bowls and veggie trays also can be made to order.

Seven-inch pecan and pumpkin pies, perfect for four people, also can be purchased.

Visit https://www.vistro.com for a full menu.