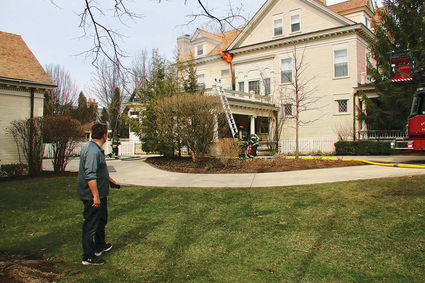 Crews from Hinsdale and 16 other fire departments/protection districts responded to the April 11, 2018, fire at 329 E. Sixth St. These photos show the point of origin at 2:43 p.m., how the fire spread to the roof at 3:31 p.m. and the final damage at 5:15 p.m. The 3-11 alarm fire also drew crowds of onlookers, said firefighter Steve Tullis, who was stationed in the basket overlooking the scene for six hours. "I looked out to the sidewalk and I could see hundreds of people on the sidewalk," he said. (Jim Slonoff photos)

Jennifer Reenan was volunteering in the art room at Avery Coonley School on April 11, 2018. Her phone was off.

Meanwhile, workers at her home at 329 E. Sixth St. were in the final stages of replacing the roof on the 119-year-old home. They were using a blowtorch to seal the synthetic shingles on the porte cochere when the material caught fire.

"When I came out (of school), I turned my phone on and I had all these text messages," Reenan said.

She and her youngest son, Declan, who had been dismissed first, left immediately.

"I grabbed him and left the other two behind," she said. "Broke all the car line rules that day, but my friends forgave me later."

They made the trip from Downers Grove to Hinsdale in record time.

"The firefighters weren't even here yet," Reenan said. "I believe it was just one of the police officers. You could just see little wisps of smoke coming from the side of the house."

What she didn't realize is that the house's balloon frame style of construction, with gaps between floors ceilings and interior and exterior walls, created the perfect environment for the fire to thrive.

"Even though I was just seeing wisps of smoke, it was just raging in that cavity," she said.

Soon flames were erupting from the windows and had spread to the back of the house by the kitchen. Crews from Hinsdale and 16 other fire departments soon were on the scene.

"I don't even know how many we had," Reenan said of the many firefighters.

She was concerned for her black Lab Ruby, which firefighters were able to rescue, the safety of the crews and her neighbors.

"I knew everything else was just stuff," Reenan said. "I didn't want our neighbors' houses to be damaged. There were some scary moments."

While all this was going on, Reenan was also desperately attempting to contact her husband, Neal, who was working in his Boston office. She eventually got through to his secretary. By that time, TV news crews were on the scene, showing live footage of the blaze. He used it to his advantage when trying to book the last flight out of Boston, his wife said.

He arrived late that evening, just as the last fire truck was driving away, she recalled. Firefighters had been on the scene for hours, ensuring all hot spots had been extinguished

Reenan soon learned that the water used to fight the fire caused more damage than the actual flames.

"Not that I'm mad at the fire department. They saved the house," she said.

Firefighters work to cause as little damage as possible, even as they are cutting holes in the roof and breaking doors and windows to allow the fire to vent up and out, said Lt. Steve Tullis, public information officer for the Hinsdale Fire Department.

"We try to minimize as much damage as possible because of the significant values of the homes and the amount of personal items and artifacts inside the house," said Tullis, who was on the scene. "It was quickly determined this was a home of significant historic value.

"They went through on the first floor and covered up some of the antiques I had inherited from my grandmother. We were actually able to save some things," she said.

Her first call the next day was to David Post, a fellow Hinsdalean who is president of EIS Group, a Burr Ridge company that specializes in fire and water damage restoration. Post said he's seen some 1,300 fires in his 28 years on the job.

"This was probably near the top if not at the top," he said. "It presented a lot of challenges because of the size of the home, the extensive amount of damage, all the mitigation that was necessary to save the structure."

Time is of the essence, he said, if crews are to restore, refinish or duplicate any of the home's features.

"We spent an extensive amount of time pulling panels and doors, anything that had architectural value," he said.

As they were collecting samples, documenting their location and storing them in zippered storage bags, they were also cognizant of the documentation Reenan would need to file an insurance claim. The work is time consuming.

"We were literally here from April to the end of October, six months, every day, almost my entire team basically teeing it up for (builder) Dave Knecht to take it from there," Post said.

Personal effects had to be sorted through as well. Her son Trevor's bedroom was on the third floor, which ultimately had to be completely demolished.

"He lost almost everything, content-wise," Reenan said. "We were able to find his favorite little bear covered in soot, and my wedding dress was up there."

Reenan is grateful to the many friends and neighbors who helped. The Huizengas offered their house as a home base the day of the fire, so Reenan had somewhere to regroup and charge her phone. The Anos family watched Declan, Trevor and Fiona until they went to their grandparents' house to spend the night.

Previous owners, including the McGue family and Bud Cushing - who came up from Texas after learning of the fire - lended their assistance. Many others found numerous ways to help.

"I give a shout out to my Avery Coonley family and friends that are in the Hinsdale area," she said. "They took the kids under their wings. I didn't have to worry about lunches or in the coming days laundry or anything like that."

Sharon Sodikoff, who sold them the house, bought the kids pj's. Matt Bosquette volunteered to care for Ruby until arrangements could be made to board her. Neighbors took up a collection to replace Trevor's collection of Rubik's cubes and colorful socks. Families they knew from Wizards soccer got the boys new uniforms and backpacks. 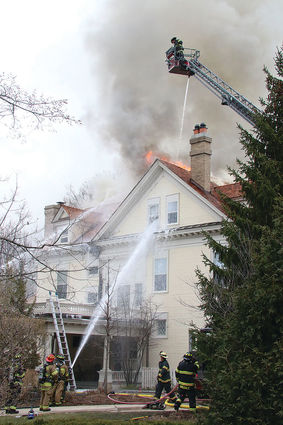 "We were all just so grateful and so blessed that we have each other and great family and friends and resources," she related. "It was going to be OK."

After spending a couple of weeks at a hotel, the Reenans were able to rent a house just a few blocks away at Seventh and Elm streets.

They knew, despite the extensive damage to their home, that they wanted to rebuild, even though they had only lived in the house for two years. The "American Beauty" - as the house is known - spoke to them the first time they saw it, Reenan said.

"It was a very instinctive thing. We walked into this house and basically fell in love with it," she said. "We really wanted to bring it back to what it was before."

This is the first in a two-part series. Next week: restoring the house to its former glory.

Bassett, a printer and publisher born in Pennsylvania, came to Hinsdale in 1887, according to Sandy Williams’ book, “Hinsdale — Images of America.” He and his son-in-law, Charles Washburn, were horticultural enthusiasts and founded Bassett & Washburn, which became the first firm to produce American Beauty roses for the commercial market. The company was Hinsdale’s largest employer at one time, with 85 staff members and a series of greenhouses that covered 40 acres between Seventh and Eighth streets from Elm Street to County Line Road.

Construction of Bassett’s home made headlines in the Nov. 25, 1899 issue of The Doings, according to Mary Sterling’s book, “Hinsdale’s Historic Homes — and the People who Lived in Them.”

“By Christmas O.P. Bassett will be comfortably domiciled in his new Sixth Street residence,” the article states. ”One of the contractors told a Doings reporter yesterday that its cost would exceed $25,000.

“In exterior beauty and interior magnificence, few suburban residences can rival it. The first floor is finished in quarter sawed antique oak, highly polished. ... At the stair landing is a beautiful window design of stained glass, the finest in Hinsdale.”

Basset retired in 1907 and soon after moved to California, Williams wrote. The house remained in the family until 1913, when it was purchased by Robert Gordon, treasurer of Quaker Oats Co., according to Sterling. He owned the home until 1942.

At that time, the Moyers bought the home and made interior and exterior changes, removing the side portions of the porch and replacing glass doors, fanlight and keystone above the front door with wood paneling, according to Karen Knecht’s blog, “The Old House Rescue.”

Only two more families, the Bohnens and Cushings, owned the home until the McGues purchased it in 2002.

They carried out a major renovation project and reversed many of those exterior changes, recreating the full front porch and wrap-around open terrace.

Jennifer and Neal Reenan, the home’s current owners, purchased it in 2016.

The Victorian/Colonial Revival has been on the National Register of Historic Places since 2004. It also is the recipient of a Hinsdale Historic Preservation Award.