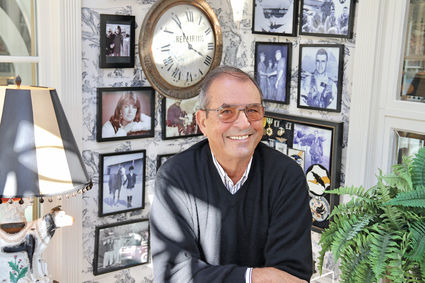 BILL TRADER HAS LIVED IN HINSDALE SINCE 1977 • ROSE TO RANK OF MARINE CAPTAIN • NATIVE OF PHILADELPHIA • FATHER TO LISA, GRANDFATHER TO TRYSTAN & DREW • AVID GOLFER

On a rookie mission at the start of his combat tour in Vietnam, U.S. Marine pilot Bill Trader was jolted in his cockpit by bright tracers of anti-aircraft fire in the skies ahead.

His veteran bombardier/navigator next to him brushed it off.

"He said, 'Oh, that's far away, don't worry about it,' " the longtime Hinsdale resident recalled. "Because it's at night, you see the tracers streaming and it's like, 'Ooh!' "

Trader had been deployed to Da Nang, Vietnam, in September of 1968 to fly bombing runs targeting Viet Cong positions under the cover of darkness. The two-man A-6 attack aircraft he flew were well-equipped.

"It was like the only true all-weather airplane," he said, citing the self-contained radar and advanced technology aboard. "So we could drop without seeing anything."

What dropped during a mission were 28 500-pound bombs, the biggest load of any tactical airplane except the B-52. One time, a bomb release malfunction forced him to return to base prematurely, the extra weight then causing the plane to skid off the runway.

"Which was little hairy," Trader remarked.

His path to the war zone began with an ROTC scholarship to attend the University of Pennsylvania. A summer stint on a U.S. Navy destroyer after his freshman year persuaded him that he was meant for higher altitudes. He joined the Marines in 1965 and was sent to Quantico, Va., for basic training, where he encountered a group of gung-ho instructors.

"They were raving about how lucky we were that we would get to go to war," Trader said.

There were several more stops en route to getting his wings in 1967. Like McCain Field in Meridian, Miss., named for the father and grandfather of late U.S. Sen. John McCain, who was a flight instructor when Trader was there. Trader was eventually assigned to Cherry Point, N.C., for A-6 training. After 18 months, he received his orders to Vietnam with the "Flying Bats" squadron.

"It was hot as the dickens - and humid," he said of his new overseas station.

He credited his predecessors in the conflict zone with doing the risky groundwork of softening the adversary's defenses.

"They were losing crews like one every 40 missions," Trader said.

His task was primarily to chase Viet Cong ammunition trucks up and down the Ho Chi Minh Trail. Trader admitted growing disillusioned with his superiors' decision-making, which seemed to yield scant results

"Probably after three months, I felt I'd met the challenge. Then it became a matter of survival," Trader commented. "We lost a lot of lives for nothing."

Returning home in the fall of 1968 to his wife Marie and an 18-month-old daughter who didn't know who he was, Trader worked as a flight instructor before launching a career in bond trading. For Trader, Veterans Day is bittersweet occasion.

"It's remembering a lot of good friends, alive and dead," he said.