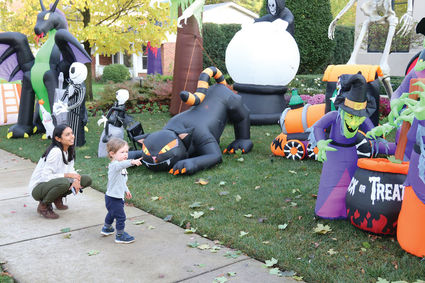 Ziggy Siedlecki and his caregiver, Jules Valle, check out the Martin family's decorations at 218 E. Walnut St. There's plenty to see across the street at 215 E. Walnut St., as well, including a matching 12-foot skeleton. (Jim Slonoff photos)

The Martin family at 218 E. Walnut St. decorated their house for Halloween for the first time last year. You wouldn't know it from looking at the yard, which is home to a host of inflatable figures - and a 12-foot skeleton.

"We went into Home Depot and they were just starting to put out their Halloween stuff," Chris Martin said. "A week later when we came back we saw the giant skeletons there, but they were already sold out and you couldn't buy them anywhere. My wife embarked on a mission to find it."

Erica found two at a Home Depot in Florida, but the store wouldn't ship them. She found two more in Colorado Springs, about an hour drive from her uncle, who lives in Denver.

"He drove to pick it up," Martin explained. "It just so happens her cousin, who lives in Indiana, was visiting (the uncle in Denver), so he drove it back to Indiana and then he drove it back here and dropped it off."

Don't look for the second skeleton in the family's yard. It's across the street at 215 W. Walnut St. While some have described the houses as having dueling decorations, it's really a collaborate effort, Martin said, and one that has brought the neighbors closer.

"It's been a terrific, great thing for both of us," he added.

The Martins moved to Hinsdale in December of 2016, just one month before their son Thane was born. He is their main source of inspiration, his dad said.

"There's that change that happens where you just naturally kind of think about things that would make them happy and laugh and have fun," Martin said, acknowledging that Thane was skittish around the headless horseman last year and took some time to warm up to the skeleton this year.

"It's really enjoyable to see the neighbors come by," he said, noting that Thane often waves visitors over, saying, "Come see my 'flatables!"

The only drawback is that installation does require some time.

"I've declared Oct. 1 the National Inflatables Holiday," Martin said. "I took work off and I set them up. There's a lot of work that goes into the planning of where to put them all, especially when you get new ones. The first time we put them up, there's usually a rearranging that happens."

He does get an assist from his lawn guy, who buries the electric cords and helps him re-stake the sculptures.

Martin is enamored with his new skeleton - especially given the efforts it took to acquire it - but he's also partial to the cat that spans the walkway.

"That I would say is the favorite because my son loves running through it," he said. "A lot of people like the train because it's really colorful." 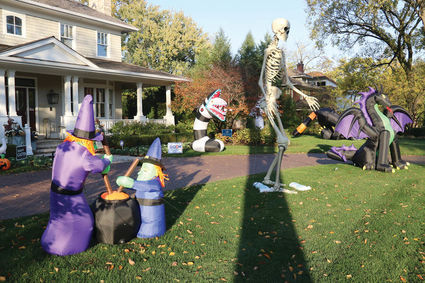 Martin said he and his family enjoy driving through town and seeing all the decorations people put up.

"Everybody has different styles. I guess ours is sort of overload," he said with a laugh.

Halloween will be over at midnight Saturday, but that doesn't mean Martin's yard, or the one across the street, will be free of inflatables until next Oct. 1.

"The collaboration is continuing on Christmas," he said. "You just might see 18-foot matching snowmen in the yards."