Tennis team cleans up at sectionals 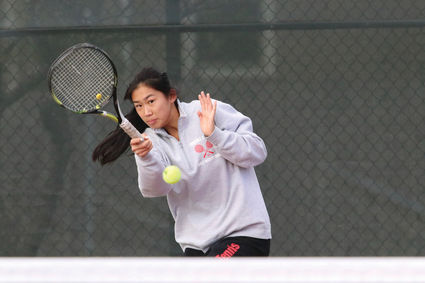 Sophomore Nicole Hu (left) and senior Yasmina Eshac compete in the IHSA Sectional meet Friday afternoon at Hinsdale Central. The two went on to make it to the finals, with Hu coming in first and Eshac coming in fourth. (Jim Slonoff photos)

Ending the season at state with first- and fourth-place singles players and first- and second-place doubles teams would have been a great accomplishment for the Hinsdale Central girls tennis team.

Instead, those places were earned at the IHSA Sectional meet Oct. 17 in La Grange. With the shortened season due to the COVID-19 pandemic, the sectional meet was the team's final competition.

"I know her. We play in the same club," Hu said. "Obviously I hoped to do well and win. I guess with these things, you never know. I guess I was happy I was able to win."

Weather was a factor during the final rounds Saturday morning, with cold temperatures and gusty winds.

"That made me have to play a little more consistently and change my strategy to play with the wind," Hu said. "At times it was frustrating with the conditions."

Zsinko believes the weather was a factor for senior Yasmina Eshac, who placed fourth.

"I was happy Yasmina got to play sectionals as a senior," she said. "She had that as her goal. Fourth is a great job. She played some good people."

The four have played together since before they arrived at Central, Kim said, adding that it's tough to compete against friends and teammates.

"On the court, me and my partner, Prachi, tried to focus on the match rather than that we were friends, because in the end they were our opponents," she said.

Kim and Shah were doubles partners for a bit last year before Kim broke her right thumb. But the two have known each other since they were 10 or 11.

Shah said they thought they could win the sectional title going into the meet.

"Our opponents, Bridget and Zoe, they are also really solid players," she said. "We knew it was going to be really tough, but we were going for the win."

Kim and Shah were undefeated this season, something Shah attributes to their personal relationship.

"I think we just have a really good bond and we're really good friends. I think it makes it a lot easier to be doubles partners," she said.

With such a strong team, it would have been a great year to compete at state, Zsinko said.

"There are girls that didn't get to play conference and they are great players," she said. "It's a good problem to have as a coach. I wish we could have played state."

"It is really disappointing because I think me and Sophia had a good chance of maybe even winning the state title," she said. "I'm really incredibly glad that at least we got a season because I know other sports don't have the opportunity. I'm really grateful this is one of the sports that we were able to play."

Hu said having tennis as a part of her life was particularly important this fall. 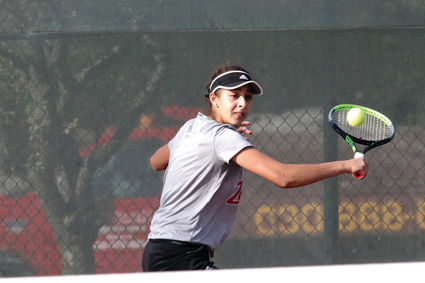 "It's definitely a really nice break from remote learning and all that's happened right now to have a team and to have friends that I get to spend time with in practice," she said. "I'm really happy there was a team. I think sectionals turned out really well and I'm grateful for the opportunity."

Kim appreciated the effort that went into making the season a fun one.

"I just felt like Hinsdale Central, they did a really nice job of trying to make the season as normal as possible with the banquet (outdoors) and still having team bonding activities and allowing us to do that, which was really nice given the pandemic," she said.