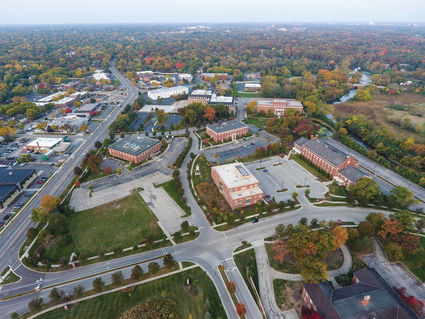 The Salt Creek Medical Campus is under new ownership.

The set of four outpatient medical office buildings on Hinsdale's north end, containing a total of 156,600 square feet of office space, was sold on Sept. 4 for $50.9 million to Remedy Medical Properties by MedProperties Group.

Jay Heald of MedProperties said the medical office property has long been a favorite target for investors and that market has become particularly sought after in recent years.

"Health care has always been attractive - not recession-proof but recession-resistant. No one cares about strip malls and retail space right now, and people don't want to touch (traditional) office space," Heald said.

The fact that the property was both put up for sale and sold in the midst of the pandemic testifies to the strong appetite for these types of properties, he noted.

"It seems like the medical office market continues to remain strong, despite everything else happening in the economy," he remarked.

Heald said Salt Creek's size and diversity of providers, along with its location surrounded by affluent communities and proximity to the Tri-State Tollway, were factors propelling multiple offers from would-be buyers.

"It's a campus setting, with Edward-Elmhurst across from Amita Health across from University of Chicago Medicine. People can go there to see different providers all in one little cluster," he said. The Hinsdale Surgical Center is also located in the campus. "There really isn't this kind of cluster many places, which makes this one a unique offering for the buyers."

MedProperties, which enlisted CBRE to market the property, purchased 12 Salt Creek Lane and 907 & 901 Elm Street in 2012 and 2013, then acquired and developed 8 Salt Creek Lane in 2014 for Edward-Elmhurst Health. The properties are reportedly 88 percent leased collectively.

"We are always happy to see continued reinvestment in the village," he said.