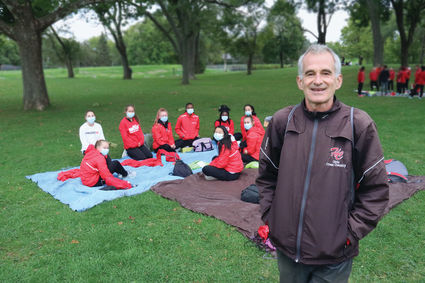 Hinsdale Central girls cross country coach Mark McCabe prepares his team for Tuesday's meet against intradistrict rival Hinsdale South at KLM Park. McCabe is marking his 20th year leading the program, which has been among the state's most elite during that time. (Jim Slonoff photo)

In 1998, Hinsdale Central's girls cross country program was looking for an assistant coach. Mark McCabe had a track record helping the boys the previous six years and had coached some of the girls distance runners during track season. But would that experience translate?

"I never really pictured myself as a full-time girls coach," McCabe admitted.

Despite that, he took the position and quickly found his stride.

"I loved it," he said. "(Girls) are like sponges in terms of soaking up everything that you teach them."

Head coach Gail Avgeris' retirement two years later led to his elevation to the top spot. Now in his 20th year at the helm, McCabe reflected on his coaching journey and the heart for young people that propels him.

"The kids have to know first and foremost that you care about them," he said. "Then they'll go to the ends of the earth for you."

The Oak Park native was a standout runner at Oak Park-River Forest under coach Roy Gummerson, whom he credits with helping shape his approach to coaching. McCabe went on to Eastern Illinois University, then a powerhouse on the Division II cross

"I knew all along I wanted to be a teacher and a coach," related McCabe, who got his wish in his first job at Teutopolis High School as boys and girls head track coach. Stints at Dixon and Libertyville high schools followed before he arrived at Central in 1995.

The program won the state title in 2006, establishing a standard that would be reflected in nine conference championships and 12 top-10 state finishes, not to mention a slew of accolades for individuals. McCabe said capturing the first-place trophy is gratifying but doesn't constitute the biggest reward.

"I remember standing up on that stage and thinking, 'Boy, this is cool!' but it wasn't a life-changing moment. It was all the stuff that helped you get there, the work and the experiences and everything that came together at the right moment," he said. "At the end of the day, you realize it's about the difference you make with kids."

Or, as one of his staple motivational quotes would render it: "Luck is when preparation meets opportunity."

"I still have some of my favorites written on a white board in my room as a memory of how incredible my time in Central's cross country/track program was," Byrne said. "Coach himself is without a doubt the most dedicated person I have ever met and really treated his athletes like we were collegiate athletes and his friends. I consider myself very lucky to have had him as my coach."

McCabe takes pride in Central's strong representation in college programs of all levels.

"It's rewarding to see people go on and be successful in college and in life and to think that maybe I was able to play just a little part in that," McCabe said.

Those recruits also include erstwhile teammates Reilly Revord and Grace McCabe - Mark's daughter - who are presently competing as juniors at the University of Missouri and University of Iowa, respectively.

Revord praised McCabe for creating a culture of camaraderie at Central.

"Coach McCabe had a strong emphasis on team, and that allowed me to bond with my fellow teammates, who are still some of my best friends today," she said. "It allowed me to run not only for myself, but for a greater purpose and prepare for competing at a higher level."

McCabe said Central student-athletes are generally not in need of motivation but rather a healthy perspective on achieving the potential, which can take various forms, depending on the person.

"It's not so much motivating them as guiding them and helping teach them the importance of balance," he said. "It's learning how to deal most effectively with different personalities."

He said it was not unusual to put in 70 hours a week during the season between his work as a guidance counselor and coaching. Although he retired from counseling four years ago, staying on as coach has kept him plenty busy. Plus, he's able to coach daughter Catie as he previously coached Grace.

"It's really been a great chance to be able to combine family and job," said McCabe, who's wife Sarah is the former girls cross country coach at Oak Park-River Forest.

Every year at the banquet, he tells graduating seniors his wish.

"I say, 'I want you to look back and say joining the cross country team was the best decision I ever made,' " he shared.

McCabe said he plans to keep coaching today, tomorrow and for the foreseeable future.

"I'm going to keep doing this until I'm not willing to give 100 percent anymore," he said. "Then it's time to leave."